Does rubbing Vicks on the feet really stop coughing? 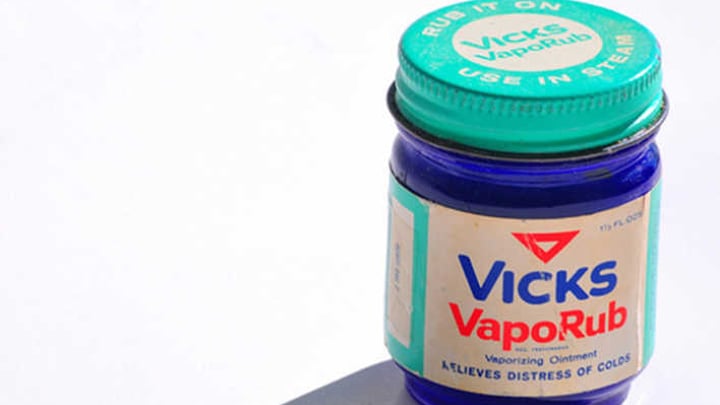 You may have seen it yourself — or perhaps you’ve heard through friends and family — that rubbing Vicks VapoRub on your feet prevents coughing. At this point, it’s so prevalent you might even say it has become something of an urban myth! We’re not sure how many have heard of this remedy or swear by it, but as it’s peak flu season, we decided to do some sleuthing.

A while back we saw a post on Facebook that read, “Some people have used Vicks VapoRub for years for everything from chapped lips to sore toes and many body parts in between. But one usage is getting a lot of attention lately because studies show that it works 100% of the time. Although scientists discovered this remedy, they are not sure how or why it works, but it does. And it works every time. To stop night time coughing, you put Vicks VapoRub generously on the bottom of both feet at bedtime, then cover with socks. Even persistent, heavy, deep coughing will stop in about 5 minutes and will stay suppressed for up to 8 hours of relief. Studies show that it is more effective in children than some of the strongest prescription cough medicines on the market today. In addition, it has a soothing and comforting effect that brings on a sound and peaceful sleep.” 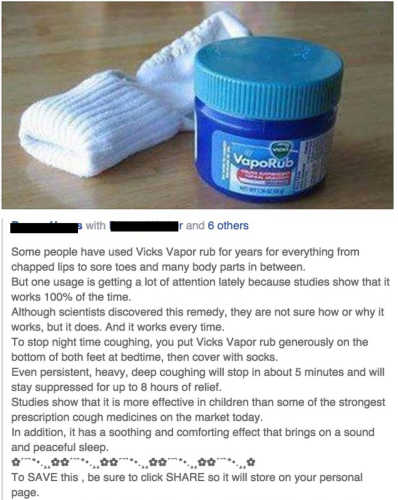 Looking at this, the first clue should be the claim that it works “100 per cent of the time.” Funnily enough, this ‘stat’ has been around since 2007, and relates to a so-called claim by the Canadian Research Council. Sorry folks, but this institute doesn’t even exist. The National Research Council (NRC) of Canada, which does exist, came forward with a statement soon after saying that no such study involving Vicks VapoRub had ever been conducted by the NRC.

In retrospect, it seems a little odd that we’d accept such a strange rumour to begin with. Could it be that we all believe just a little bit in reflexology (the correspondence of the hands and feet to other organs of the body)? Some people have taken their faith in foot-related detox so far that they have bought into foot spas and detox pads, which have been shown to be a load of junk.

But, we have to ask, does VapoRub work in any significant way? Turns out, the menthol in VapoRub does have soothing abilities, but it’s most effective for coughing and nasal congestions when it’s close enough for you to breathe it in. That’s why Vicks recommends putting it on your chest, because the vapours are able to travel into your nasal passages from that distance. The fact that your feet are nowhere near your nose means it’s not going to do a whole lot for you if applied down there!

According to paediatricians, the possible explanation of why VaporRub might be believed to work on feet could be because a baby or small child can inhale the Vicks even when it is applied on their feet. Another explanation could be because the menthol in the VapoRub dilates the blood vessels in the feet, causing reflexes that soothe the cough.

There is also the Theory of Counter Irritation, whereby pain or illness can be relieved by a counter irritation. Vicks VapoRub contains menthol, eucalyptus and camphor, which stimulate blood flow to the skin causing counter irritation. Folk medicines worked in similar ways — applying poultices and liniments containing mild irritants such as garlic and mustard to the soles of the feet and the chest — to relieve cough and colds.

It seems, Vicks VapoRub — as with all medications — should be used only as directed (on the chest). So if you see or hear something that sounds too good to be true on the internet, don’t forget to do a Google search before you pass the information on!