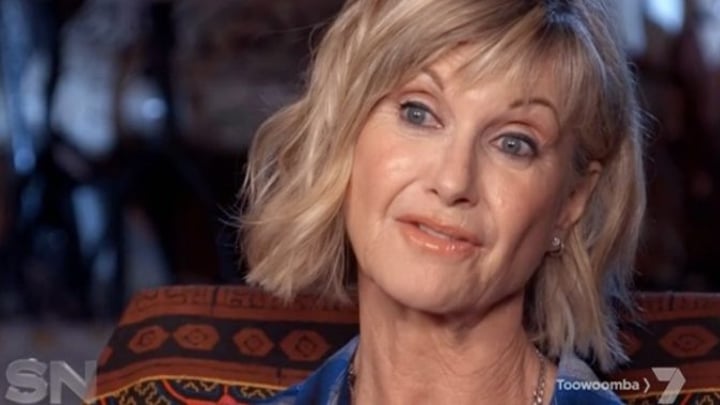 Olivia Newton-John has revealed she was secretly diagnosed with cancer for the second time six years ago, but chose to keep it secret from her fans until now – as she now continues to fight the disease for the third time.

The Grease star, 69, famously beat breast cancer in the early 1990s, before revealing last year that she had been diagnosed with the disease again – this time in her spine.

However, while it was claimed to be her second diagnosis at the time, she has now revealed in an emotional TV interview on Channel 7’s Sunday Night that it’s actually the third time she’s had it – and secretly overcame breast cancer again six years ago.

She discovered the tumour in her right shoulder after she was involved in a car accident, around the time her sister Rona died from an aggressive form of brain cancer in 2013.

Next on @SundayNightOn7 – after so much heartbreak, #OliviaNewtonJohn (@OliviaNJ) finds happiness with a new man. Plus a surprising confession – that's ahead on @Channel7. pic.twitter.com/27VeuQgvPr

When she first felt the lump in her shoulder shortly after, she assumed it was a result of the seatbelt slamming in to her during the crash. Sadly, it was actually the breast cancer she had beaten two decades before returning.

She insisted on the show that she wanted to keep this second diagnosis secret, as it felt personal after sharing her first battle so widely with the public years before.

“I thought ‘I don’t really need to share this, it’s my life and something I wanted to keep to myself’,” she told reporter Alex Cullen.

#OliviaNewtonJohn’s (@OliviaNJ) work to help cancer sufferers continues. She will be in Melbourne next Sunday at her annual @ONJCancerCentre Wellness Walk and Research Run, but you can get involved wherever you are in the world. Visit https://t.co/9eXfIrR2aI for more details. pic.twitter.com/SroYpiiw9N

The singer overcame the disease for a second time, all completely behind closed doors, before tragically discovering she had it for a third time last year – when a tumour was found in her lower spine. She still hasn’t had the all clear, but is hopeful she will in the future.

Olivia has chosen to dismiss conventional cancer medicines, opting instead for natural remedies and marijuana, grown by her husband in a state where it’s legal.”

As reporter Alex expressed his sadness, on behalf of all other Aussies, she added: “I’m one of millions in this journey. A lot of people see it as a fight, and that’s their prerogative, but I see it as part of my mission.

Coming up on @SundayNightOn7 – #OliviaNewtonJohn's (@OliviaNJ) greatest battle continues, as her closest mates rally in support. Plus the treatment she hopes can soon help all Australians with cancer. That's still ahead on @Channel7. pic.twitter.com/CZ9GlODZHQ

She first confirmed at the end of May last year that she is battling the insidious disease again. This time, the cancer had spread to her sacrum, a bone at the base of the spine, a discovery which was made by doctors treating her for what they thought was sciatica, a common back complaint.

One of her biggest supporters has been singer Delta Goodrem, who famously overcame Hodgkin’s lymphoma previously.

Opening up on their friendship and performing together, the star broke down in tears on camera and admitted: “When I look at her… I find it so hard because it’s quite personal actually.”

Do you have a message for Olivia? What did you think of her interview?