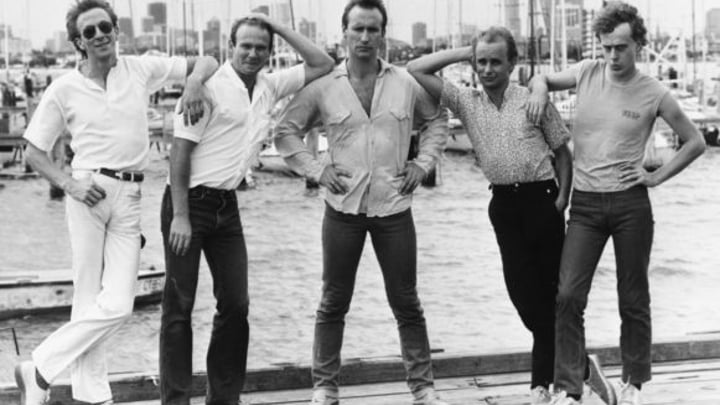 They enjoyed worldwide fame throughout the 1980s and beyond with standout hit ‘Down Under’ and many more, but Men At Work’s success was marred in more recent years by a devastating legal battle – followed just two years later by a band member’s shock death.

Now, lead singer Colin Hay, 65, has opened up to Starts at 60 about his sadness over his close friend and fellow musician Greg Ham’s death at the age of 58, and the effect the bitter copyright lawsuit had on him in his final years.

Hay was sued in 2009 by Larrikin Music Publishing which claimed the flute line in 1981 hit ‘Down Under’ had been taken from children’s song ‘Kookaburra’. The song had initially been written without the riff, but it was later added in by Greg Ham during the recording stage.

While Ham was never sued himself – with Hay, EMI Songs Australia and another writer being targeted in the copyright lawsuit – he apparently felt guilty for being the one to have added the short riff in, especially when the band lost the case.

Just over two years later, Ham was tragically found dead in April 2012 at a house in Melbourne, after suffering a suspected heart attack.

While Hay has now insisted he cannot comment on whether the lawsuit had had an effect on Ham’s health, he revealed his friend felt deeply affected by it at the time.

“I can’t really speak for how it affected his health but I know that it was a very depressing thing for him, because he wasn’t sued, personally,” Hay explained. “I was sued, but he felt an enormous responsibility and a sense of guilt about the fact that he played that line.

“I think it had a very negative effect on his life, but I don’t really know to what degree it really affected his health because I wasn’t there a lot of the time, I was here. It certainly didn’t help.”

Asked when he last heard from Ham before his death, Hay said: “I’d had an ongoing email dalliance with Greg and spoken to him a few weeks before that… I was always friends with Greg, right up until he passed.”

Hay first formed Men At Work with Ron Strykert and Jerry Speiser in the late 1970s. They were then later joined by Ham and John Rees.

However, in 1984 Rees and Speiser were sacked following tensions within the band and, addressing the difficult time, Hay has now admitted he has some regrets over how it all played out.

“There was an initial split when the drummer and bass player were sacked by Ron, Greg, myself and the manager, and that’s initially what happened,” he said.

“In retrospect, I think I would have done things a lot differently. But at the time you’re dealing with information you had and that’s what happened. That was really the end of Men At Work when that happened, not that we realised it at the time.”

He put the tensions down to personality differences and admitted there was an element of “small-mindedness” on some people’s parts.

“You could ask five or six different people and get five or six different answers,” he said. “Jerry and John didn’t like Russell who was the manager, and Russell was my friend who I’d known for years. It was like that show Survivors, dare I say it, where you’re constantly waiting to see who will get sent off!”

While he was close to Russell at the time, he now concedes he should have done more as a manager to try to prevent the split.

“What Russell could have, or should have done better, was to actually have been someone who kept the band together as opposed to being somebody who was actually part of the problem,” he added. “He didn’t have those social skills or communications skills.”

Following those two exits, Strykert then also left shortly after and looking back now, Hay admitted he’s not sure he was every truly happy being in the band in the first place.

“He [Strykert] was in the band but I don’t think he particularly cared for the band!” he explained. “So in the middle of the third record, he said to me one day, ‘Oh I think I’m going to go home’, and I said, ‘Oh yeah, are you going to come back?’ and he said, ‘No, I don’t think so’. He never came back.”

Hay has been busy touring with former Beatles legend Ringo Starr and his all-star band in recent years, and asked his thoughts on the musician, Hay said: “There’s no downside to touring with Ringo, it’s a beautiful experience on stage and off. I feel quite privileged to have gotten to do that – not many people can. It’s a great experience all round.”

The singer said he’s also had the chance to meet Paul McCartney, who he described as “delightful” and added: “That was a highlight for me, meeting him for the first time.”

Meanwhile, Hay is now touring with a new line-up of musicians from right around the world, including his beloved wife and musician Cecilia Noel, and will perform in this year’s Byron Bay Bluesfest as well as a series of other venues around Australia throughout April.

“It’s a wonderful band, I love playing with them,” he said of the line-up, which he’s been touring with for the last few years. “They have a definite personality … You can’t really manufacture that, it either happens or it doesn’t. The audiences have really taken to the band.”

To see all of Hay’s Australia tour dates and to buy tickets for a venue, or his appearance at Bluesfest, visit his official website here.

Are you a fan of Men At Work’s music?