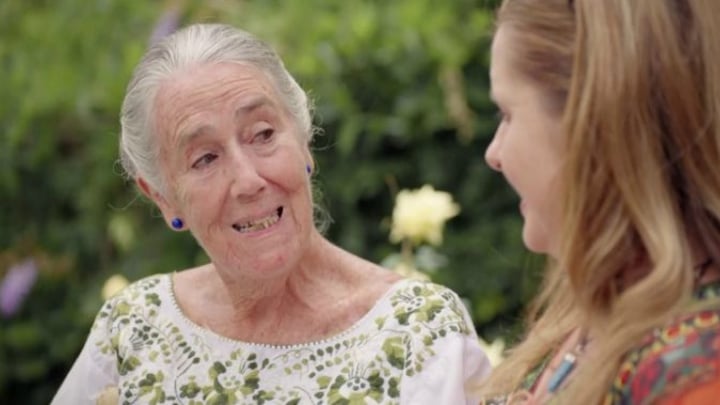 Maggie Blinco in an episode of Bent 101.

At the age of 83 Australian actress Maggie Blinco feels she is in a category all on her own as far as roles go. She has played her fair share of dementia patients of late but is excited to be playing a politically incorrect nanna in a new comedy.

Talking to Starts at 60, Maggie said that as long as her memory lasts, and her energy, she will continue to perform. But she is doing her best to ensure that retirement is not going to happen any time soon.

“I do go to the gym a couple of times a week,” Maggie Blinco said. “I should go more often. I do if I can. I seem to have a busy life. I am very involved with my family. I have a pretty healthy diet.”

She also feels keeping an active mind is also important. “I knit. I love knitting complicated patterns. I also like doing crosswords. You have got to keep your memory alive by learning things.

Maggie admits she came to the acting industry at a late age. While she had done acting while at university she was actually in her late 30’s when she turned professional. After university she headed overseas and saw a lot of theatre there but never thought about being on stage herself.

“I didn’t really know how to become an actress, and that is the truth. As passionate as I was, and I loved it. I loved making people laugh. I just didn’t know quite really how to go about it.”’

After a marriage and having a baby overseas Maggie eventually returned home to Australia. With her husband they got into the second hand trade, selling antiques. “When we were in England it was the rocketing ‘60s. Vintage clothing was huge there. That was our lives for a long time.”  Maggie said it was thanks to her husband Bill, and their two children, for supporting her in her acting career aspirations.

The Nimrod Theatre Company based in Sydney was founded in 1970 by John Bell, Richard Wherrett and Ken Horler. It gained a reputation for producing more good new Australian drama that any other theatre company from the ‘70s to mid ‘80s. It also got Maggie into the spotlight.

“I knew a lot of the people who were involved in the early Nimrod. They’d been at the university at the same time and I thought I can’t help it, I’ve just got to get back into it.  Richard Wherrett remembered me from university days. My first huge theatrical break was in Summer of the Seventeenth Doll, which he directed. It was a role that just suited me down to the ground. I knew that woman. She was like my aunts, my cousins, I knew that era. I got wonderful reviews for it. That set me on the path to playing that sort of Australian slightly tough woman.”

Maggie got herself an agent at the age of 37 and hasn’t looked back. “My career started slowly but I had to learn a lot. Theatre had changed, and TV was now huge. Gradually I just built up from there. I’m not a Shakespearean but I am a really good Australian actor.”

As well as lots of theatre productions Maggie has appeared in a large number of iconic Australian shows over the years. From Alvin Purple and Chopper Squad in the earlier years, to A Country Practice and Return to Eden, then more recently Rake and Doctor Doctor.

Perhaps her most well known work is playing the role of Ida in Crocodile Dundee, 1 and 2. She said working with Paul Hogan was a pleasure. “He is a highly intelligent man. He and John Cornell knew exactly what they were doing. I think he sat back and watched everybody and learned an awful lot. He was very jolly to work with.”

Maggie was offered a spot in the third movie too but had to turn it down as she was already committed in another role.

Maggie plays a ‘tough old nana’ in her latest show, Bent 101, a comedy currently being shown on PLUS 7. The show is a series of six minute episodes with a continuous storyline. It is a project that was entirely crowd-funded and filmed in Sydney.  You can also see it via the Bent 101 website, plus it will be screen on 7Flix on June 19.  “I had such fun doing that. I’d love to do some more of it, it’s so funny. Wonderfully politically incorrect.”

There is no stopping her. Just last week Maggie was in Tasmania filming another piece with director Jennifer Kent, a new film is set in the 1820s in Tasmania. “I think it is going to be amazing. She is a wonderful director.”

Maggie admitted that Australian writers don’t create many roles for actors in her age bracket, unlike other countries.

“The English write wonderful roles for actors and actresses in their later years, kicking up their heels and doing all sorts of wonderful things.” But she is still grateful for whatever role she can get. “Any role is welcome. I think it is wonderful to be working. I have a great lust for life and I love my profession because I work with wonderful people and I work with younger people. That is always fascinating. I’ve got to the age where they are always a little respectful for a while, then they find out that I am fairly informal,” she laughed.

What are your secrets to keeping your mind active?