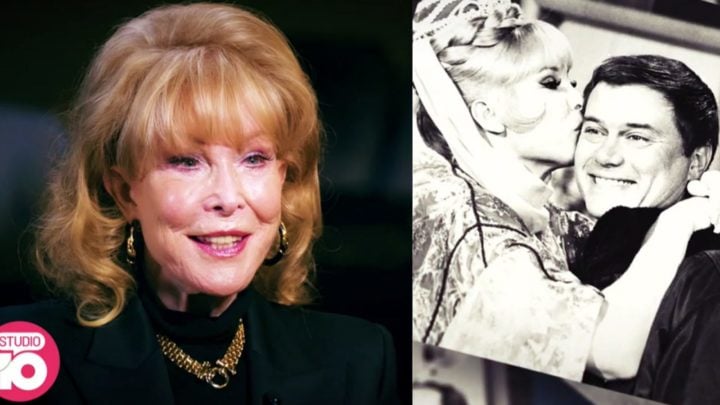 I Dream of Jeannie star Barbara Eden spent five seasons working alongside co-star and on-screen lover Larry Hagman on the hit show, and now she’s opened up on his battle with drugs and alcohol in a tell-all TV chat.

The 87-year-old actress appeared on Studio 10 to discuss everything from her time on the show and her fight to save Hagman’s job, right through to her theories around Marilyn Monroe’s death and her experiences working with Elvis Presley.

While Hagman appeared focused and happy on screen during his time on I Dream of Jeannie, his co-star has admitted he was actually battling his own private demons – and didn’t want to be there at all.

There were rumours that their on-screen love had triggered a real life romance at the time, but Eden has always denied there was anything but friendship between them. However, behind his on-screen persona, Hagman was battling the start of a long addiction to alcohol.

“He was very unhappy, in the show, [but] the minute we’d get in front of the camera he was there. He was awake, he was there and he was doing it,” she insisted.

At the time, producers began to consider replacing him with another actor as his battle with alcohol started affecting his behaviour on set, but Eden fought for him to stay.

As the Studio 10 presenter pointed out that it was her “big heart” dictating the decision, Eden said: “No, my big brain said he was the best person for that part. He was wonderful in that part. It would have been a huge mistake, I’m sorry for him because he didn’t like doing it, but he thanked me for saving his house!”

Hagman went on to star on TV series Dallas, with Eden briefly joining him towards the end of the show as a guest star and, recalling that time, Eden said: “It was fun, it was a little strange, but it was fun.”

Elsewhere in the TV chat, Eden recalled appearing alongside Elvis Presley in Flaming Star and she said of the King of Rock and Roll: “He was a lovely, lovely human being, gentle, kind, and I loved his music.”

She also had the chance to work with late actor Paul Newman who she described as “a very gracious person to work with”.

Before her success in I Dream of Jeannie, Eden appeared in series How to Marry a Millionaire – with her role based on that of Marilyn Monroe’s character in the original movie.

She eventually met Monroe, as they both shared the same stand-in – Evelyn Moriarty. Recalling the meeting, Eden said: “Marilyn was over there doing wardrobe tests. I’m standing there with [Evelyn], and Marilyn came out and [Evelyn] said, ‘Marilyn, I want you to meet my other star’.”

Monroe was filming her last movie at the time and Evelyn later confided in Barbara following the famous actress’ death, claiming she never believed the reports at the time.

“Evelyn said, ‘She would never take her own life’. I just feel it was probably an accident,” Eden said. “She wanted to get to sleep, and took too many [pills]… I hope that’s what it was.”

Do you remember watching I Dream of Jeannie?