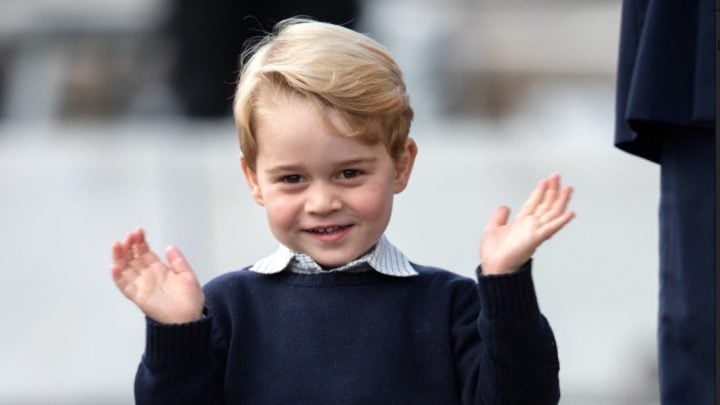 He’s one of the most well known kids in the world, but while Prince George has three names to choose from – he left a dog walker astonished when he revealed he actually likes to be called something completely different.

According to The Sun, the oldest son of the Duke and Duchess of Sussex, whose full name is George Alexander Louis, got chatting to the dog walker while out in Berkshire with his grandmother Carole Middleton and sister Princess Charlotte.

The woman, who did not want to be named, told the news outlet she was asked not to take photos of the kids by a police minder, but got talking to five-year-old George when he began stroking her dog.

“Just to be friendly I engaged in a bit of small talk and I asked George what his name was, even though obviously I knew it,” she explained.

“To my astonishment he said ‘I’m called Archie’ with a big smile on his face. I don’t know why he calls himself Archie but kids often play with their names and I think it’s lovely.”

It’s unclear if it’s a sweet name that his parents use, or simply a name George has chosen himself.

George already reportedly has several nicknames, with his parents referring to him as their “little grape” before he was born.

From there, it’s been claimed in several news outlets that he got named “PG” at school and his parents made it “PG Tips” or just “Tips” at home.

Archie is originally a German name with Scottish roots, where it is shortened from Archibald.

His father William was reportedly affectionately known as “Wombat” by mum Princess Diana, while he went by Steve at university.

Meanwhile, it comes amid reports in the Mail on Sunday that Princess Charlotte will join her brother at his £6,000 (AU$11,000) a term school in September.

So far she’s been attending Willcocks Nursery in Kensington since January 2018.

According to Thomas’s Battersea school’s website, it describes itself as “a busy, thriving, purposeful school’ which offers a ‘rich and broad curriculum”.

What do you think of Prince George’s sweet nickname? Did you have nicknames for your kids?