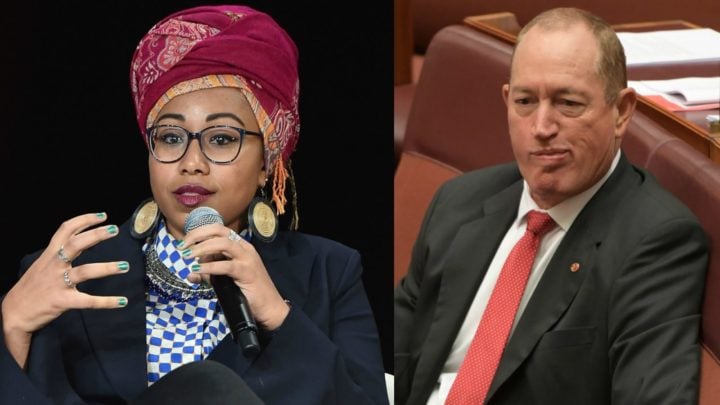 Yassmin Abdel-Magied has hit out at Fraser Anning on Twitter. Source: Getty

Anning, who was censured by parliament last week for comments linking the Christchurch terror attacks to Muslim immigration, tweeted on Friday that Europeans are “at danger of becoming a minority in their own countries” and “have a right” to defend their way of life.

The comments drew the ire of Abdel-Magied, who left Australia in 2017 after receiving threats over her comments about refugees on Anzac Day. The activist hit back at the senator in a tirade of tweets on Saturday, rubbishing the his claims and encouraging him to read up on the duties of his elected position.

“You’re living in Australia, a nation that was stolen from the Indigenous people who happen to be blakkkkkk, ya know? So the foundation of your arguments are rubbish,” she wrote.

“Also, who are your people and what is your way of life and why do you have the right to defend it?”

The Australian activist said Anning was entitled to express his opinion, but denied he had a right to defend his way of life.

“You don’t have the right to defend a way of life that is prejudiced, discriminatory and down right harmful to others. You don’t. Stop claiming you do. I had a look at the human rights charter. Right to defend ur way of life isn’t there,” she wrote.

“Putting aside you are not technically a European (lol) or have any entitlement to the land on which you are on (more lols) why are you so worried about Europeans becoming a minority, anyway?

“Is it because you know that traditionally minorities get treated like sh*t?”

“That’s what Europeans did to others. Across the globe. That’s what your sorts did. Scary, huh.”

Anning has been widely criticised for his views on muslim immigration and made headlines last month when he was egged by a teenage boy over his comments on the Christchurch terror attack.