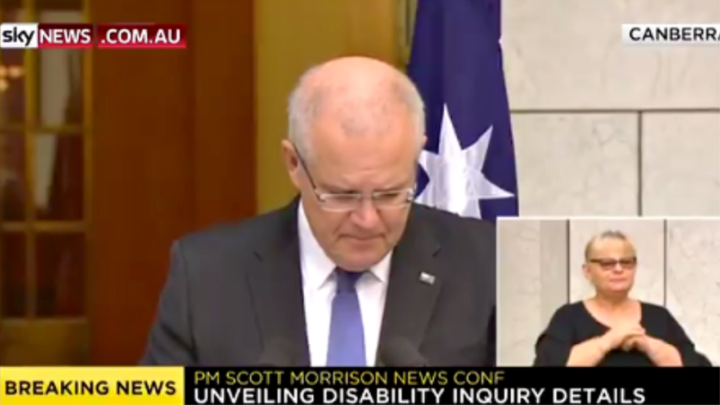 Scott Morrison struggled to contain his emotions as he announced the Royal Commission into the disability sector. Source: Sky News

Prime Minister Scott Morrison struggled to hold back tears as he announced a $527 million royal commission into the disability sector on Friday morning.

The Liberal leader fought to contain his emotions as he made the official announcement outside of Parliament House after gaining the necessary support and approvals from the Governor-General and individual states and territories.

The Royal Commission into Violence, Abuse, Neglect and Exploitation of People with Disability will be based in Brisbane and run over the course of three years. Former Federal Court judge Ronald Sackville will lead the commission, supported by five commissioners

Speaking on Friday, the prime minister teared up as he spoke about his brother-in-law Gary Warren who has multiple sclerosis.

“As my brother-in-law Gary also said to me, ‘It is not flash being disabled but the good thing is that that’s the condition you live with in Australia and that you’re an Australian, that has always meant a lot to me,” he said in a press conference.

Fighting back tears Morrison then added: “They deserve our respect.”

The prime minister continued by explaining how everyone across Australia deserves respect and how the commission will hopefully change things for the better.

“It will provide the opportunity for Australians to truly understand how people with disabilities live in this country and what obligations are to share the journey with them,” he said. “To show them the respect they deserve as fellow Australians, as a fellow human being.

“To enable them to be all that they can be and that they and their families can experience the richness of life in this magnificent country.”

The Royal Commission follows extensive consultation across Australia into the sector and is expected to run for three years with the final report due to be handed down in April 2022.  It will investigate violence, abuse, neglect and exploitation within the industry.

“We listened to the feedback and have now finalised the Terms of Reference, which define what the Royal Commission can investigate and make recommendations about.

“Importantly, over 96 per cent of people responding to the survey agreed the Royal Commission should cover all forms of violence, abuse, neglect and exploitation, in all settings where they occur – and that’s just what it will do.”

Are you pleased to hear a Royal Commission will be undertaken into the disability sector? What results would you like to see from it?