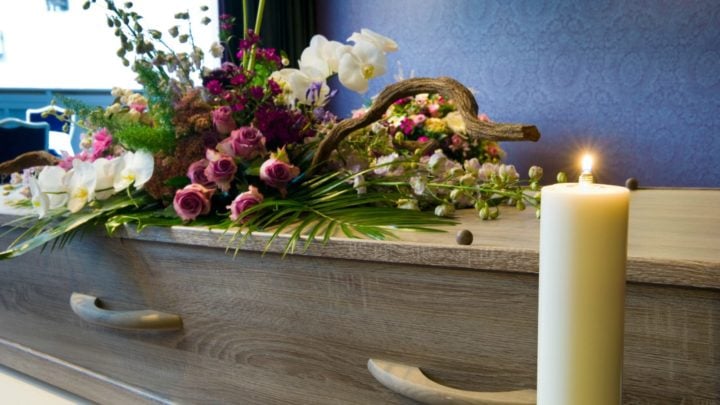 Australians now have the option to watch funeral services from home through a live stream service. Source: Getty

Alternative funeral trends have soared in popularity in recent years as people get creative whilst planning their final farewell, and the latest idea allows loved ones say their goodbyes from the comfort of their own home thanks to live streaming services.

Whether distance is a problem or a person needs more time to grieve in private, Australians can now be a part of someone’s funeral without actually having to make the trip to the church, crematorium or venue.

Company OneRoom Funeral Webcasting came up with the idea to set up a series of cameras in the venue which can stream live footage of the ceremony anywhere in the world with just the click of a few buttons.

Once a service has been booked and scheduled, email invitations are sent out to guests with secure login details, allowing people to access the service using the Internet.

When the service is scheduled to start the cameras turn on automatically and record for the allotted time. The footage is then streamed live and can also be recorded to be viewed following the service using the same login details.

OneRoom’s David Lutterman said it’s the perfect option for those who are strapped for cash or time and can’t make it to the event.

“With a funeral you only get one chance,” he said. “By making the service accessible online, live or later, no one has to miss it.

“Filming is done discretely and non-invasively by wall-mounted cameras.  Invitation to watch online can be private or public. Recordings are stored securely and can be viewed up to 60 days following the service or downloaded by authorised family or guests.”

Read more: Funeral trends: You can now deliver your own eulogy via a hologram

The streaming service has been a hit with Aussies seeing a massive increase in usage over the past couple of years. In fact in 2018 alone, over 80,000 people tuned in to a virtual funeral for a loved one using the webcasting service, almost 50 per cent more than the year prior.

According to Lutterman this is just the beginning with numbers expected to rise even more as the use of technology increases.

“There is no evidence that physical attendance at funeral services has dropped, we simply allow more people to be included where distance, time or circumstances prevent them attending in person,” he explained.

“At short notice, things like distance, poor health or finances often prevent people from making it to the funeral service on the day.  Being able to watch it online helps with their own healing process and also eases some of the guilt at not being able to attend in person.”

He added: “The recording of the service is an emotional asset that grows in value over time.  The recollections on the day help to keep those we have lost, more present in our own lives and thoughts.”

What do you think of the idea? Is it something you would consider for a loved one’s funeral?