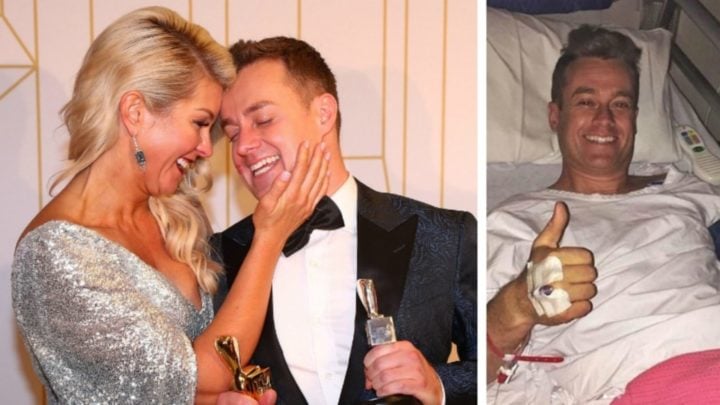 Chezzi Denyer has been caring for the couple's two daughters while Grant recovers from his injury. Scout. Source: Getty/Instagram.com/2dayfmbreakfast

Grant Denyer’s wife has given an update on the TV host’s slow recovery from a severe back injury, saying it’s been tough spending time apart over the Easter period.

Chezzi Denyer took to Instagram on Friday night to share a photo of the couple’s two daughters playing in a pool on the NSW coast on Good Friday while Grant rested back in Sydney.

“Good Friday without Daddy just doesn’t feel the same. At all,” Chezzi wrote.

“Trying to keep the girls busy with some swimming on the NSW coast while Daddy rests and recovers in Sydney still.

“While he has improved somewhat, it’s going to take a lot of rest and physiotherapy to get him back to his vibrant active self … As anyone with a back injury knows, your back health rules you and has to take precedence.”

Good Friday without Daddy just doesn’t feel the same. At all. Trying to keep the girls busy with some swimming on the NSW coast while Daddy rests and recovers in Sydney still. While he has improved somewhat, it’s going to take a lot of rest and physiotherapy to get him back to his vibrant active self.. As anyone with a back injury knows, your back health rules you and has to take precedence.. We will surprise him tomorrow with a visit from these two waterbabies! Happy Good Friday to all xoxo

Chezzi said she plans on surprising Grant with a visit on Saturday for some much-needed family time.

While Grant has spent much of the past month in hospital, he managed to make a very special return to his hosting duties on Dancing With The Stars last week.

Taking to Twitter ahead of the live show, Grant said it took a “magical procedure” to get him back on his feet.

“It is so good to be back here … right in time for the business end of the series, ” the father-of-two said as the show kicked off.

“Great to be back on my feet. A bit of a unique and magical procedure has happened to get me here tonight!”

The TV host was admitted to hospital in March after a backyard accident left him with a painful bulging disc in his back.

Denyer had been using a sledgehammer to knock a star picket into the ground in his paddock when the accident occurred, leaving the star in immense pain and struggling to walk or even stand.

After being bedridden for days, the presenter was eager to get back to his hosting duties and, after getting local anaesthetic and an epidural, he was finally allowed to leave hospital. However, things took a turn for the worse the following day when the incredible pain returned and Grant was rushed back to hospital.

The accident occurred just a month after Grant and Chezzi opened up about his difficult recovery from a monster truck crash in 2008, which left him with a broken back and dependant on pain killers.

Speaking on his 2Day FM radio show, Grant revealed how his now-wife Chezzi helped him quit the prescription pills, confessing: “I said things that I had no control over and I’m still humiliated.”

Grant told listeners he became dependant on the medication after spending four months in hospital with a broken back. The strong medication left him dazed and confused as he struggled to differentiate between dreams and reality.

“The one thing that nobody ever tells you when you do an injury and the hospital never lets you go telling you, is that the medication is often worse than the actual injury itself. The things it can do to your head … are so horrific,” the 41-year-old said on air.

Chezzi became emotional when talking about the “horrific” things the TV star did when he was on medication and the toll caring for him took on her own mental health.

“I had to receive quite extensive counselling afterwards because he honestly believed he would never walk again and we had no real outside help. When we brought him home from hospital, I’m not a nurse, I didn’t know what I was doing,” she said.

“Some of the things that we went through would test any relationship.”

Have you ever had a serious back injury? Do you have message for Grant as he recovers from his latest injury?