‘The lows were very low’: Elton John opens up in new Rocketman teaser 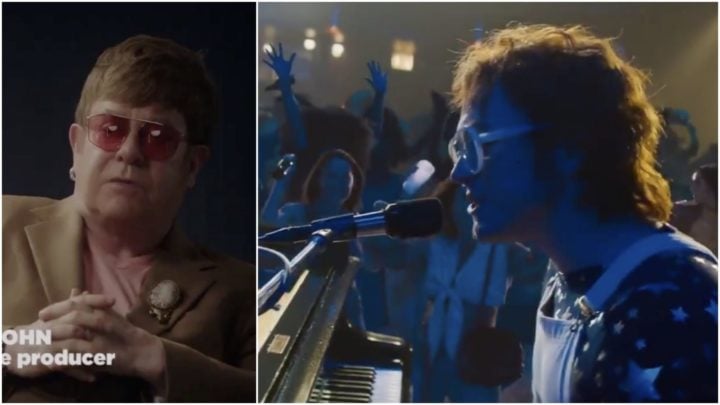 The upcoming Elton John biopic is set to be released in May. Source: Twitter/Bryce Dallas Howard.

Fans of Elton John have just one month left to wait for the release of Rocketman and now a new clip features the man himself talking about the making of the movie, revealing it’s an “honest” portrayal of the highs and lows he experienced throughout his incredible career.

While we’ve already been treated to a glimpse of leading man Taron Egerton belting out some of the ‘Your Song’ hitmaker’s biggest tunes, including ‘Tiny Dancer’ and ‘Bennie and the Jets’, this new video touches upon Elton’s “unhappy” childhood.

The footage was shared on Twitter by Bryce Dallas Howard, the actress who plays Elton’s mum Sheila Dwight in the film, and features interviews with a number of the movie’s stars as well as director Dexter Fletcher, the singer’s husband David Furnish, who also produced the movie, and even Elton himself.

“Mozart, Beethoven, and Elton. What do they all have in common?” she wrote. “They are musical prodigies. Having grown up listening to Elton John’s music, it’s been mindblowing to learn the story behind the genius. His epic journey will absolutely blow your mind!”

Mozart, Beethoven, and Elton. What do they all have in common? They are musical prodigies. Having grown up listening to Elton John’s music, it’s been mindblowing to learn the story behind the genius. His epic journey will absolutely blow your mind! Watch it May 31st #Rocketman 🚀 pic.twitter.com/YEZT76XqHT

Speaking in the short clip, the 72-year-old icon – who took on the role of executive producer – says: “It had to be as honest as possible. The lows were very low, but the highs were very high. That’s how I wanted the film to be.”

While his husband, with whom he shares two sons, adds: “Music as a young boy pulled him out of a very unhappy childhood, and that opened the door to a world full of infinite possibilities.”

Actor Taron Egerton also speaks in the clip, describing his role in Rocketman as the “greatest joy of his professional life”.

While director Dexter Fletcher, who also worked on Oscar-winning Queen biopic Bohemian Rhapsody, said: “Because of the nature of who Elton is, the storytelling allowed us to totally indulge in fantasy and imagination.”

@maddenrichard and I did an episode of @carpoolkaraoke for @rocketmanmovie . As you can see from the footage, Richard and I can’t stand each other and the movie is no fun at all. Available now on @appletv

Last month, Egerton posted a hilarious video clip on his Instagram account which showed him and co-star Richard Madden belting out some of Elton’s most loved hits, as they took part in an episode of Carpool Karaoke.

The talented pair, who play Elton John and his manager John Reid in the upcoming movie, clearly enjoyed themselves as they drove through the streets of London, singing the world-renowned songs and joking about their time filming together.

At one point Richard can be seen encouraging Taron, who is dressed in an extravagant Elton-style costume, into the car. After much effort, Taron finally manages to squeeze himself behind the steering wheel ready to set off on their singing session before Richard comments: “I think you should maybe change”.

To which an annoyed Taron, 29, replies: “Richard, I’ve said this the whole time, I said it’s not going to work.”

Joking about the colourful costumes worn throughout the upcoming movie Taron then adds: “Why is it that you always get to look cool, smooth and winning as a handsome leading man and I look like a big multi-coloured chicken, it’s ridiculous.” As a frustrated Taron exits the car Richard yells out: “A handsome chicken”.

Are you a fan of Elton John’s music? Are you looking forward to seeing Rocketman?