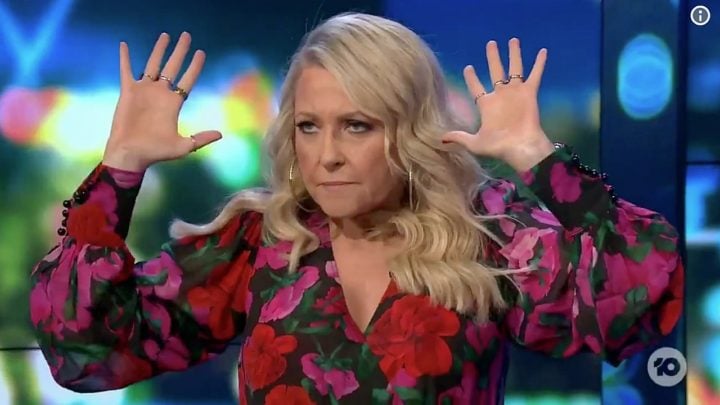 Television host Angela Bishop revealed the worst celebrity interview in 30 years during a segment on The Project. Source: Twitter/ The Project

Television host Angela Bishop has interviewed her fair share of celebrities over the years but there is one chat in particular that has taken the crown as her worst encounter with a star.

The 51-year-old dished all the dirt during an appearance on The Project on Sunday night in celebration of 30 years on TV.

While there have certainly been some exciting moments throughout her time with Network Ten, Angela said actress Faye Dunaway was one of the most awkward interviewees.

The reporter claimed she’s “had a couple of awkward ones” but the Bonnie and Clyde star made things especially difficult for her.

Angela explained how she had just flown in from London after an interview with Kate Hudson and was suffering badly with jetlag. So in order to prepare for the interview with Dunaway she asked a friendly rock and roll singer for some inside intel.

Congratulations to Aussie TV legend @AngelaBishop who is celebrating 30 years on @Channel10AU. Ange stopped by the desk to give us the highs and lows of her illustrious career. pic.twitter.com/Eg8xgpnfjl

“So I was chatting with Mick Jagger who was on the exercise bike next to me down in the gym as I was trying to stay awake,” Angela told The Project hosts.

Feeling confident about the upcoming interview Angela said she headed off for the chat and upon meeting Dunaway held out her hand to introduce herself. However, instead of going in for the handshake she was met with an unsavoury response from the Academy Award winner.

“I put my hand out to say, ‘nice to meet you’,” Angela  explained, to which Dunaway replied while lifting her palms in the air: “Ladies don’t shake hands.”

“And I went, ‘oh, this is going to be hard to rescue,'”Angela recalled. Adding: “If it’s started that badly, it’s very hard to get it back on the rails”.

Having learnt from her lesson Angela said she next time she saw Dunaway she made sure to keep her hands firmly behind her back.

However, Angela said thankfully not all interviews have been difficult, naming a chat with comedian Sacha Baron Cohen as one of her favourites.

The reporter explained how exciting it was to interview the actor while he was in Sydney at the famous Bondi Beach.

“It was so exciting, it was so much fun to do. It was the only one he did out of a studio anywhere in the world I think.”

Are you a fan of Angela Bishop? Do you like watching her on Studio 10?