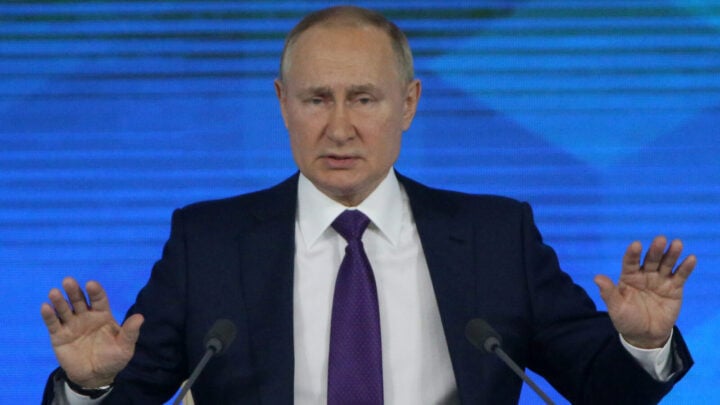 Putin’s offer to negotiate peace with the current Ukrainian leadership is most likely designed to deceive the public, primarily his domestic audience, that Russia wants ‘just’ peace. No, the truth seems to be closer to Putin’s wanting and working towards Ukraine’s unconditional surrender.

He does not merely want that Ukraine undertake not to join NATO. This much the current Ukrainian leadership may be willing to accede to.

But Putin also wants Ukraine to recognise the annexation of the two easternmost of Ukraine’s self-declared republics. To this, the Ukrainians are unlikely to agree. Putin most likely wants to annex much more Ukrainian territory, including Odesa in south Ukraine. He wants to annex as much of Ukraine as he can get away with, to fulfil his ambition to regain much of the lost territories of the Russian empire lost at the collapse of the Soviet Union.

He knows clearly that the current Ukrainian leadership would not have a bar of agreeing to Russia’s annexing parts of south Ukraine. So he would not even mention these in the proposed peace negotiation farce.

Given that the Ukrainians would not agree to even recognising the annexation of much of Eastern Ukraine, by refusing to recognise the self-declared Ukrainian eastern breakaway republics, Putin would continue his propaganda. That it was the Ukrainians who started this war; and that it is this current ‘drug addict, Nazi’ leadership of Ukraine who does not want peace.

Putin wants nothing less than the annihilation of the current Ukrainian leadership, a complete defeat of Ukraine and then ‘negotiating’ with his Russian imposed Ukrainian puppet government that would agree with all his terms to carve up Ukraine, installing Russian hegemony over the remaining Ukraine.

So a coming show of so-called peace negotiations, which Putin is setting up to fail, is only a delaying tactic to pretend that Russia wants to make peace, while it will be further consolidating its position to militarily take Kyiv and other major cities in Ukraine, in addition to annihilating the current Ukrainian regime.

While the above is all speculation, it is true that Putin has before him the playbook of the precedent of the Soviet peace negotiations with Hungary; in 1956, they crushed the Hungarian anti-Soviet revolution.

When Hungary declared its independence from the Soviet Union at the Hungarian Revolution in October 1956, the Russians withdrew their occupying forces from Hungary and promised to honour Hungary’s independence.

But after ten days of freedom, Khrushchev reversed his decision and on Mao’s urging, he invaded Hungary.

The Army Chief, Pál Maléter and Imre Nagy, the Prime Minister of Hungary, took refuge in the Yugoslav embassy when the Soviet troops entered Budapest.

The Soviets offered to negotiate with those two in good faith for peace if they came out of the embassy for the negotiation. But when those two obliged, the Soviets simply arrested and then executed both of them.

They then installed their own puppet regime led by the Soviet-trained communist Kádár who acceded to all of the Soviets’ demands for Hungary to once again become a Soviet puppet state.

Putin, an ex-KGB officer, stated that the collapse of the Soviet Union has been the greatest tragedy of the 20th century.

Now he is hell-bent to attempt to restore as much of that empire as he can get away with, while China, Russia’s other nuclear ally watches Putin’s moves with barely disguised satisfaction.

Hungary just offered Budapest as a negotiating venue for the Russian and Ukrainian leadership. They also urged the UN to encourage these parties to come to Hungary for the negotiations.

If Ukraine is to participate in the Russian-proposed so-called peace negotiations, it would surely be safer for them to do so in now-NATO-member, Hungary, than near the border of Belarus which has been facilitating Russia’s invasion of Ukraine.

What's your take on the Ukraine invasion?