The Screen Critic: From Christmas violence, to Dolly Parton impersonators and space exploration 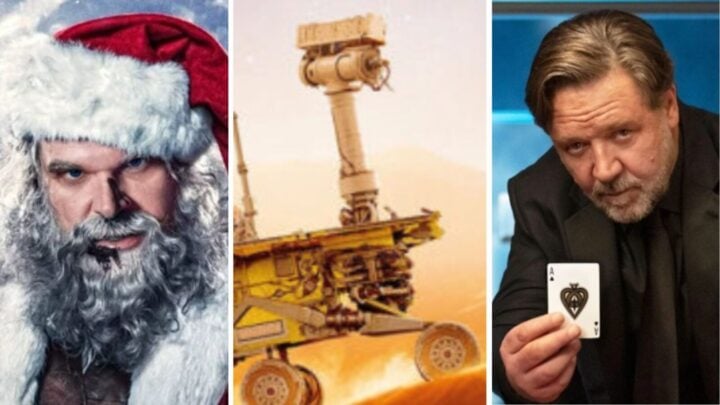 In the heart-warming, sweet-natured, adults-only action-comedy romp Violent Night we get a Santa custom-built for our jaded times. He’s cynical to the core, a boozehound, skilled in the art of unarmed combat, and knows how to swing a sledgehammer.

These talents come in handy once Santa (played with gruff, foul-mouthed charm by David Harbour) finds himself stranded in a remote, snow-capped mansion where the wealthy occupants are being held hostage by a group of trigger-happy robbers led by a gent (John Leguizamo) who considers himself a gun-toting Scrooge.

Having been abandoned by his reindeer, who were scared off by machine gun fire, Santa is left to deal with the home invaders in a bloody spree of unrelenting vigilante violence that would make Charles Bronson smile.

Yet as gritty and wild as the film gets it never dares make fun of the idea that Santa is the real deal and is somebody who takes his lists of who is nice and who is naughty very seriously, indeed. It’s a real Christmas treat, complete with red topping.

Also getting into the Christmas spirit is Marvel with its Guardians of the Galaxy Holiday Special (Disney+), a swift, spirited 44-minute jaunt in which Mantis (Pom Klementieff) and musclehead Drax (Dave Bautista) decide to get their Earthling captain Quill (Chris Pratt) a gift to honour his unusual alien ritual. So, they fly to Earth and kidnap Quill’s hero, actor Kevin Bacon.

Written and directed by GOTG guru James Gunn (the third film’s due in 2023) and inspired by the legendary, famously bad 1978 Star Wars Holiday Special, it’s a giddy special that delivers plenty of laughs, a top list of songs – including Fairytale of New York by The Pogues – and, thankfully, knows when to wrap the party up.

Of course, some grumps aren’t into the all-loving spirit of Christmas and would rather punish and bore those close to them.

If that’s you, assemble a group and take them to see the Australian film Seriously Red, an alleged comedy about a Dolly Parton impersonator (Krew Boylan, also the writer) trying to sort out her life through performance. There’s not a laugh in it and, rest assured, anyone you force to see it will never forgive you.

How the Australian film industry can still pump out films so terrible is a mystery for the ages. Avoid.

Freshly released on the arthouse circuit is the excellent, tense French film Kompromat, in which a hard-working French cultural officer (Gilles Lellouche) in Siberia becomes the target of a smear campaign that threatens to see him locked up in a Russian prison for 15 years.

Everybody supporting him agrees his only option is to escape house arrest and make a run for it through a hostile landscape and to the border of the nearest friendly country.

An amalgam of actual cases, writer/director Jérôme Salle maintains a cracking pace as Russian goons chase an increasingly desperate fugitive whose only real crime was to try and bring a bit of enlightenment to a cold, cold land.

The other big treat at the arthouses is Stars at Noon, the latest film from lauded French veteran Claire Denis that should appeal to discerning filmgoers who aren’t already devoted fans.

With a carefully measured paced and anchored by a terrific central performance, it follows the flailing fortunes of Trish (Margaret Qualley, so good in the hit Netflix miniseries Maid), a failed, trouble-making American journalist desperate to extricate herself from a Covid-ravaged Nicaragua.

With no help from home and no money – she has to sleep with people for cash and favours – Trish hooks up with mysterious British interloper Daniel (Joe Alwyn) who soon finds himself in a similar predicament.

At 140 minutes it’ll test the patience of some, but Denis develops the increasingly dangerous story with a consummate skill that cineastes will relish.

Those whose interest in space exploration has been re-ignited by NASA’s moon-bound Artemis 1 mission are going to absolutely love the Prime documentary Good Night Oppy, a stirring, beautifully produced account of the Mars rovers Spirit and Opportunity, both of which proved to be great value for money.

Launched in 2003 and landing early in 2004 on opposite sides of the red planet, both rovers exceeded their expected 90-day operational life: Spirit kept sending data back to Earth for six years while Opportunity kept functioning for an astonishing 15 years.

Some great digital animation recreates the mission with amazing realism, but the real treat is how the scientists and technicians could not resist the impulse to invest their emotions into what they knew were robots. Even people with a passing interest in space will get into this fascinating tale.

Having proved himself a fine director with 2014’s The Water Diviner, Russell Crowe does it again with the low-budget Stan drama Poker Face.

Crowe, who also did the screenplay, plays Jake, a wealthy gambler who invites four old friends to his swish architect-designed reunion of sorts.

The film is engaging enough for most of its run as Jake addresses some personal issues with himself and his pals.

If only Crowe had kept it as a straight drama without all the clumsy, somewhat silly home invasion stuff that kicks in during the final reel.

Still, it’s pretty good for the most part, and Crowe’s brooding presence remains remarkably strong, even on home screens.