‘My first grandchild: I wondered if I would live long enough to experience the joy’ 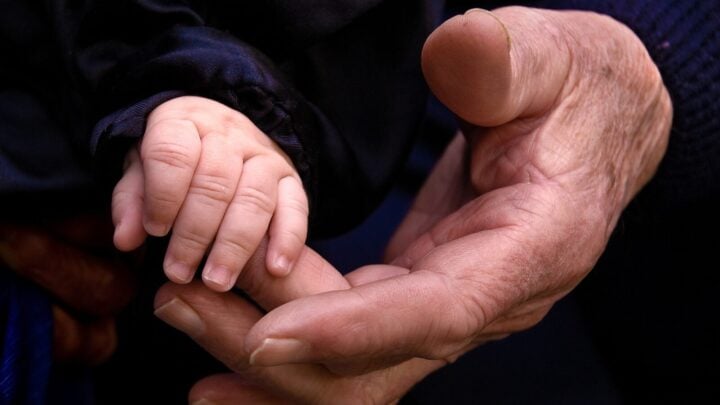 Andris wanted to share and experience the joy of being a grandparent. Source: Getty Images

By the time I hit 70, I found myself hanging out for a grandchild. I remembered how much joy it was for me to have a grandfather alive until the age of 10. But as time was passing I began to wonder if I’d ever have the privilege of staying alive for the arrival of a grandchild.

My wife and I left it late to have children and our two sons, now in their 30s, were in no hurry to start a family. But then, over nine months ago, the good news came that my elder son’s partner was pregnant with a boy.

The first 12 weeks passed without any trouble and there were no significant dramas either further along the pregnancy. Then, the due date for the birth arrived, but not yet the baby.

My son and partner still did not tell us their prospective son’s name as if saying: “We’ll give him a name once he makes it into this world.”

Well, four days overdue, he did make it in the morning after a whole night of labour. Both my wife and I were deeply moved: after all we won’t die without having become grandparents. If I can live another 10 years, my grandson may have me as a grandfather at least for his first 10 years, as it was for me with my grandpa.

Seeing my grandson on the second day after his birth and watching him dozing in my lap felt extra-special. Of course, I also studied his face for family resemblances.

There was an unmistakable intergenerational continuity in the shape of his nose: it was a replica of the shape of the noses of my father’s, mine and my son’s in our early childhood. I had this vision of four look-alike noses rubbing together in the middle, bringing about a connectedness of four generations. Our grandchild also now linked me and my wife to his mother and her parents: he laid the foundation for an extended family, both horizontally and intergenerationally.

As he lay in my lap peacefully, there seemed a deep tranquillity radiating out of him. He was brand new to this world, leaving his mum’s womb only a day before. He was still quite oblivious to his surroundings, which was compounded by his unfocussed eyes, typical of new born babies. That meant he could smell, touch, hear and taste things, but everything must seem to him in a blur. His consciousness kept vacillating between withdrawing from the outside world, by closing his eyes for mini-sleeps and opening the eyes and blinking, as if trying to focus and see things in the outside world, then giving up, closing his eyes and sliding back to his inner world.

There was still blood on the short hair on his head, a leftover from his struggle the day before, to get his head through the birth canal.

His first name means ‘a fighter who breaks forward’ and indeed he, unusually, had his hand at the level of his face in the process of being born, as if he was trying to pull himself through the birth canal into the outside world. After a whole night of intense struggle, he made it, leaving him and his mother bruised and exhausted. Such struggle at birth, once again strengthened my conviction that at every birthday we should celebrate not only the anniversary of the person’s birth, but also the mother who gave birth to the baby.

During the first night after the birth, both son and mum were able to sleep soundly. But there is no rest for the wicked! The second night was full of restlessness and crying as the hungry newborn was trying to extract in vain enough milk from mother’s breasts to get satiated. That milk was not yet flowing properly, to the frustration of the infant. But soon enough, the milk began to flow in abundance.

And he makes sure he milks his mum daily for every drop she’s got. As he is satiated and sinks into deep and blissful sleep, he is a sight to behold.

Here, the most moving picture to me of my son in his new role as a dad was a picture he sent to me lately. He is sitting in an armchair with bub in arms; my grandson having a blissful sleep, snuggled into dad’s bare chest, with my son looking exhausted and also nearly asleep. They looked like a kind of male Madonna with the son.

I was so inspired by this sight that I replied to him:

“Touch your bub, always touch, touch, touch!
It’s the one thing you can’t ever give him too much!
Babies die without touching,
But keep touching them and watch them flourishing.
Touching is worth millions of words
Because through it he feels his worth,
That his Dad can also feed him without milk,
As he feels Dad’s love through his skin’s pure silk.”

Do you remember how you felt when you became a grandparent for the first time?