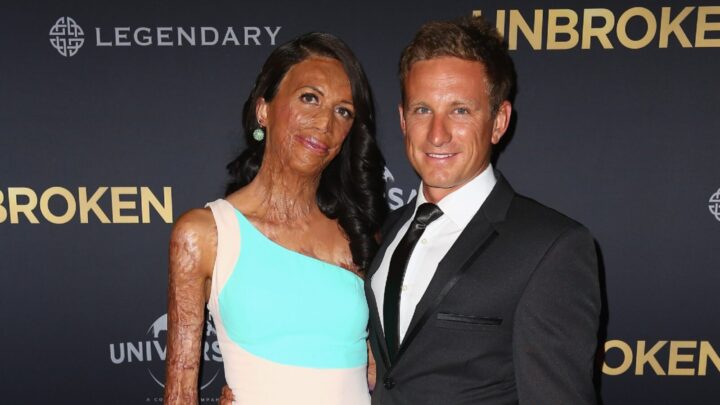 Courageous burns survivor Turia Pitt has revealed her partner's romantic first thought as she lay dying in hospital in 2011 after being trapped in a grass fire. Source: Getty.

When Turia Pitt suffered devastating burns at the age of 24 after being trapped in a grass fire during an ultra-marathon in Western Australia in 2011, surgeons told her boyfriend-at-the-time, Michael Hoskin, that “she might not live”.

They asked Michael if he wanted to see her but warned that with full-thickness burns to 65 per cent of her body, she would look very different (in Turia’s own words, her head was shaved and “the size of a pumpkin”).

The courageous burns survivor has now revealed what happened next in a recent romantic blog post that highlights the unshakeable loving bond between her and her now-fiancé Michael Hoskin.

“Michael thought: ‘If Turia’s going to die, I want to remember her how she was, with long dark hair and her big smile and her full lips’,” confides Turia.

“And then his second thought was: ‘If she survives, I’ll marry her.’”

Turia’s incredible story of survival against the odds is one of Australia’s most inspirational. After spending six months in hospital, the mining engineer and athlete underwent numerous surgeries and spent two years in recovery, which saw her wear full-body compression suits and masks.

Now, ten years later, Turia, who lives in Ulladulla, New South Wales, has gone on to become a motivational speaker, write multiple books, compete in Ironman twice and have two beautiful boys, Hakavai and Rahiti, with her fiancé Michael Hoskin.

In her romantic blog post from December 20, the 34-year-old mother also reveals how Michael used an inheritance from his Nan to buy her an engagement ring from a “charming shop in Kununurra”; sporting a diamond from the same mine where she’d worked as an engineer.

“Fast forward four years, and Michael’s proposing to me in the Maldives and I’m saying yes and we’re going midnight snorkelling with manta rays,” continues Turia, recalling one of the happiest moments of her life.

“I’ve always loved diamonds – they’re literally the hardest stuff on earth. But despite my affinity for them, I’ve always thought it was weird that a mineral almost exactly the same as graphite is worth so much money.”

Turia went on to confess that Michael’s beautiful ring, which she wore on a necklace (due to her fire-damaged fingers), had suffered a very sad fate.

“When I went to the south of France, it was around my neck, on a necklace,” writes Talia. “On the way to the airport in a taxi, I was swinging my ring/necklace back and forth in front of Hakavai and laughing at his grunts and squeals of delight. It was only when I started to walk through our departure gates that I realised I had left it in the bloody taxi.

“So I did what anyone would do in this situation. I hid from Michael that I’d lost the ring and made up vague excuses for months for why it was no longer around my neck (‘It doesn’t suit what I’m wearing,’ ‘I’m getting it cleaned,’ ‘I’ve read I need to dry out my diamond so it’s in the sun drying.’).

But in typical Turia style, the motivational speaker found an upside to the situation.

“If I’d wanted to make 100 percent sure I had my diamond ring forever, I could have never worn it and kept it in a safe my whole life. But instead it had a great (albeit short) life. It was with me through the best times – it came to Tahiti, the Maldives, watched me finish at Ironman Kona, walked the Kokoda Track with me and, best of all, it was there to give Hakavai a metallic welcome to the world.

“At the end of the day, life is not about the ring or whatever precious commodities you have squirrelled away.

“Life is short. Go and enjoy it.

“And remember that diamonds and other ‘valuable’ stuff only have the meaning that we give them.”

"Life is short. Go and enjoy it." Do you agree with Turia Pitt's philosophy on life?