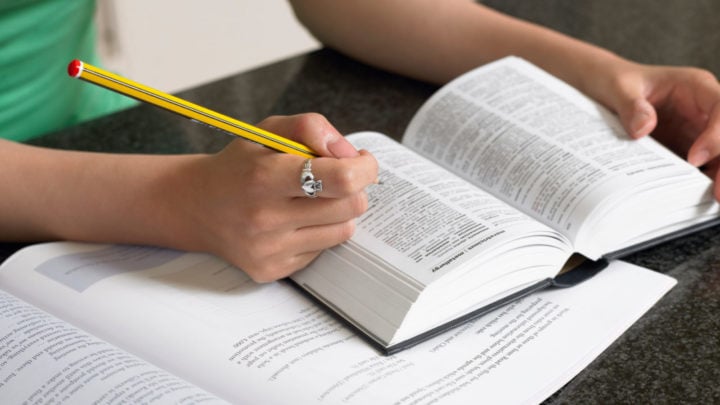 A school in Sydney has chosen to remove the use of e-books and iPads in the classroom and go back to using hard copy books instead. Source: Getty

An Australian school has made the bold decision to remove the use of digital books from its curriculum, claiming that devices such as iPads and e-books are too distracting for students.

Unlike some schools that are moving further into the technological realm, Reddam House in Sydney’s eastern suburbs has chosen to forego digital learning aids after students claimed they actually prefer to learn via hard copy books, The Sydney Morning Herald reports.

According to the publication, the school had received multiple requests from students to ditch the devices as they found it was hindering their learning.

Speaking to the news outlet, school principal Dave Pitcairn said: “The ease of navigation through the textbook was easier with the hard copy. I believe they learn better the more faculties they use, the more senses they use in research and reading and making notes.”

The controversial choice was debated on Channel 7 breakfast show Sunrise on Tuesday, with members of the public and the show’s parenting expert adding their two cents to the discussion. Some claimed it was a great idea, while others were firm in their belief that a digital aspect is now necessary in a child’s education.

“It’s a perfect idea,” one mother said. “My son is in Year 8 and I know they are constantly on their phones.”

Another felt the opposite, claiming it wouldn’t prepare them for their future careers, arguing: “I don’t really think that’s setting them up for the future.”

While a third said: “I think it’s a complementary thing, they should both be together.”

A Sydney school has dumped iPads and e-books and gone back to using old-fashioned textbooks – but experts aren't convinced that it's a good idea… 📚 pic.twitter.com/rAdnFCanh2

Speaking to hosts David Koch and Samantha Armytage on the matter, Sunrise Parenting Expert Doctor Michael Carr-Greg described it as “a strange policy”  that wouldn’t prepare students for the future.

While he admitted reading a hard copy book is more immersive than digital text, Carr-Greg said in the technology driven world, digital is now the way to go.

“You think about the iPhone 10 which recognises your face and opens up, can you imagine what the iPhone 20 will be like?” he questioned. “We’ve just got to make sure they’ve got the skills to use the devices. A bit of balance is great.”

The controversial announcement by Reddam House follows claims on Monday from another Aussie principal that students should be allowed to use the Internet and search engines, such as Google, during their final exams.

The head of the prestigious all-girls school in Sydney’s eastern suburbs claimed exams need to be updated to better prepare teenagers for their future careers, which will likely involve a digital aspect. Hogan said it’s “time for an overhaul” as the current method is essentially “irrelevant” nowadays.

“If we’re gonna [sic] test the kids, let them use the tools that they will really use when they’re out in the workplace,” he told host Ben Fordham.

Read more: Head teacher says students should be allowed to use Google in final exams

However Starts at 60 readers didn’t agree with his opinion, with many taking to social media to voice their views. The majority were surprised by the principal’s statement and said he is essentially encouraging students to cheat.

“Well what’s the point of having an exam in the first place if the student can look up the answers? I wasn’t allowed to take the Encyclopaedia Brittanica with me back in the late ’60s,” one person wrote on Facebook.

“They spend too much time on computers now, it is good that they have to use their memory,” another added. While a third reader said: “Concentrate on teaching your students. Using Google is cheating.”

Do you think it’s a good idea to ditch e-books and tablets or do you believe technology should be used in schools?