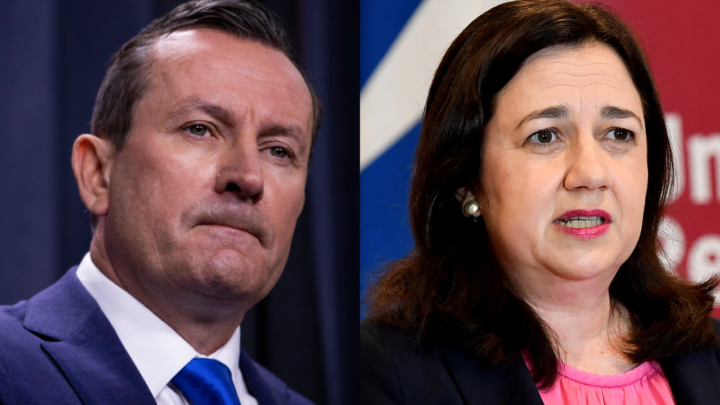 Mark McGowan and Annastacia Palaszczuk have both casted doubt on whether they will reopen their state borders once we hit vaccination target. Source: Getty

State premiers who continue to impose hard border closures once the country hits an 80 per cent vaccination target could fall into some legal trouble, a lawyer has warned.

In an interview on The Sunday Project, constitutional lawyer Professor Kim Rubenstein said that state premiers could be taken to court by Australians who have suffered as a result.

“Any person who is impacted by these restrictions and who can show that this is a disproportionate burden on trade [could mount legal action],” she said, news.com.au reports.

“So that if it can show that it is, in fact, protecting one state over the other, without a legitimate or proportional response, then it really is available for challenge. And we may, in fact, see that ahead of us.”

Professor Rubenstein went on to explain that the Australian constitution “was motivated by a desire to travel freely across the country. Colonies were finding it difficult to have barriers around trade. Section 92 was placed there to discourage any restriction of travel within Australia”.

Professor’s Rubenstein’s comments come the same day Prime Minister Scott Morrison pleaded with state premiers to open up once it’s safe to do so. Speaking to Weekend Sunrise, Morrison said there was no reason for borders to remain closed once we reach the 80 per cent double vaccination target.

“It’s important that we do move forward,” he told Seven’s Political Editor Mark Riley. “We can’t stay in second gear. We’ve got to get to top gear in living with the virus… that’s where we need to be.

“My message is to Australians that what I‘d like them to have for Christmas is their lives back.

“There comes a time when you’ve got to honour the arrangement you’ve made with the Australian people, and that is when you get to 80 per cent vaccination, it’s very clear that you can start opening up.”

Both Victoria and New South Wales have already released their national roadmaps out of Covid-19, however Queensland and Western Australia are yet to do so.

On Friday, Queensland Premier Annastacia Palaszczuk said she was unwilling to open the state’s borders even at 80 per cent vaccination target.

“If you look at the national plan, the 80 per cent actually takes you backwards and I do not want that for Queensland, so we’re probably going to see a difference for Western Australia and Queensland because at the moment we have freedoms,” she said.

Back in July, Western Australia Premier Mark McGowan said he was keen to pursue a zero Covid-19 policy in the state even after vaccination targets were met.

“Our preferred option is zero Covid obviously and that’s what we’ll attempt to do,” he said at the time.

“We retain the right to put in place border [restrictions], that’s understood, but some of the measures we put in place might ease, once we reach that level of vaccination.”

What are your thoughts on this? Do you think Queensland and Western Australia should open up once vaccination targets are met?