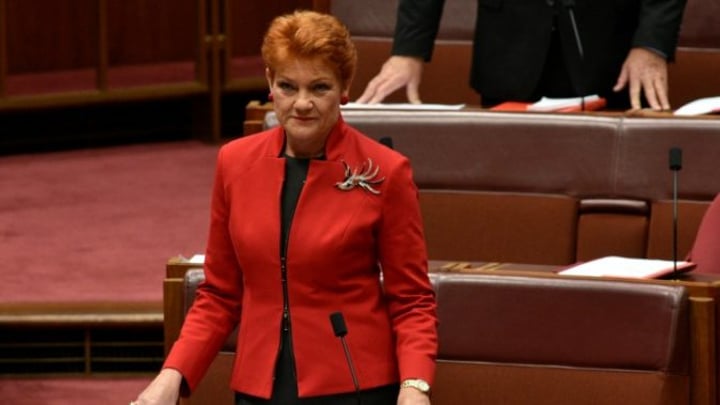 Pauline Hanson has weighed in on the gun debate, saying law-abiding gun owners shouldn’t be tarnished with the same brush as criminals.

Speaking in the Senate on Thursday, the One Nation leader called on the Greens to quit criminalising innocent gun owners, saying it was offensive to farmers and rural property owners who use guns in their everyday working life.

Her message echoed calls from US president Donald Trump, who earlier this month said it wasn’t guns that were to blame for the massacres that have plagued the US over the past decade, but criminals instead.

Hanson told the Senate “a gun is to a farmer what a wrench is to a plumber” and said they shouldn’t be punished with stricter gun laws that would make their working lives even more difficult.

“Australians have been lawfully and reasonably carrying weapons for a variety of reasons for generations,” she said. “New laws introduced over recent years have made owning a gun even tougher.”

Instead, the focus should shift towards criminals, who she said are at the root of gun violence.

“Law-abiding citizens are not the problem with guns,” Hanson continued. “Criminals are who the Greens should focus on, not law-abiding gun owners. The time for bashing gun owners must stop. Many law-abiding Australians responsibly use firearms to work, hunt and for sport and this needs to be taken into consideration.”

“We should remember the Port Arthur massacre—35 people killed, 23 people wounded,” Rhiannon said. “Right now the National Firearms Agreement, a very significant development that came out of that absolute tragedy, is under threat.

As it stands, anyone in Australia who wants to own a gun must be licensed and each weapon must be registered.

Rhiannon said gun ownership must remain “a conditional privilege rather than a right”.

“We’ve seen the Nationals really out there, wanting to promote their commitment to the gun lobby—largely because their vote has been eroded by the firearms parties—and here they are, doing something really disgraceful: encouraging children to use arms on a regular basis,” she said. “It’s also possible in this country for people to own more than 100 guns—in fact, hundreds and hundreds of guns. That, unfortunately, is one of the loopholes in the National Firearms Agreement that needs to be tidied up.”

An article released last week by the Annals of Internal Medicine found that strict gun control laws in Australia have actually saved lives. The laws enacted in 1996 following the deadly Port Arthur massacre saw more than a million firearms surrendered to officials between 1996 and 2015.

Following the Port Arthur massacre, former prime minister John Howard changed Australia’s gun laws less than two weeks after the deadly incident. There have been no further massacres since, while there were 13 mass shootings in Australia prior to the change in law.

At present, the NFA states that self-defence isn’t a legitimate enough reason to hold a firearm licence.

What do you think? Should firearms be completely banned in Australia, or are there cases where law-abiding citizens should still be allowed to shoot guns?