The hottest flicks to wrap up summer 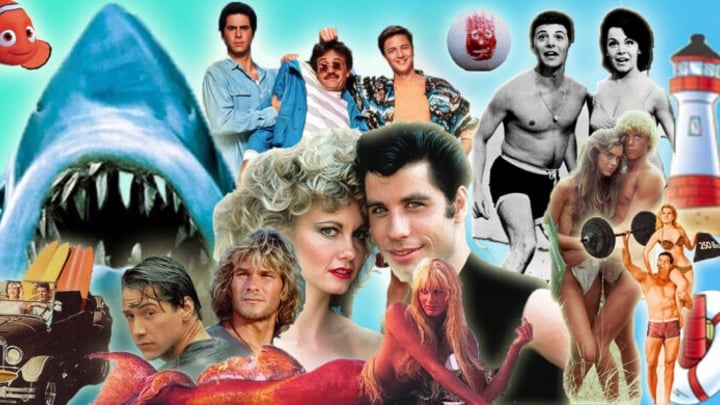 Are you looking for the perfect movie to end summer with? We've got you covered. Source: Supplied.

As Summer enters its final, glorious stretch let’s hop into the oversized low-rider convertible and take a cruise-controlled joyride through an eclectic array of films that reflect the true essence of the season.

The first thing we need to do is feel the heat, something the sultry femme fatale Kathleen Turner radiates for a sweaty William Hurt in Body Heat (1981; Apple $2.99), the film noir classic that proves, yet again, how easily men can be manipulated when they choose to think with an organ other than their brain.

The summer swelter can make people go a little crazy. In Alfred Hitchcock’s ageless shocker Psycho (1960; YouTube $3.99) it’s the oppressive desert heat of Phoenix that helps explain why straight-laced Marion Crane (Janet Leigh) steals all that money from her banker boss. In Spike Lee’s Do The Right Thing (1989; Apple $4.99) it’s the stifling New York heatwave that raises tempers along with the temperature in Sal’s Pizzeria, ultimately igniting a race riot.

Spike Lee delivers another toxic drama set in the New York heat with Summer of Sam (1999; Disney+) about 1970s serial killer David Berkowitz while the put-upon real estate agents in Glengarry Glen Ross (1992; Stan) begin their busy evening broiling in the Big Apple heat before torrential rains descend. How hot was it? “They say it was so hot downtown this afternoon,” Al Pacino tells us, “grown men on the street corner were going up to cops begging the cops to shoot them.” Talk about a dire weather report.

On home turf, we really feel the parching conditions of the 1950s shearing sheds in the classic Sunday Too Far Away (1975; Prime) as Jack Thompson sweats away with his clippers, trying to be the fastest.

But forget the toiling work. Summer is supposed to be about relaxation, and where better to unwind than at the eventful beach house in cult favourite Weekend at Bernie’s (1989; SBS On Demand) as we watch two knuckleheads fool dozens of people that their corrupt insurance company boss (Terry Kiser) is not, in fact, dead. Still funny after all this time, it’s an off-the-wall comedy that, unlike its star, refuses to die.

Taking the issue of death in summery climes a bit more seriously is the excellent, largely forgotten Travelling North (1987; Prime), David Williamson’s touching and thoughtful retirement drama about Frank, an ailing gent (superbly played by Leo McKern) who moves from cold Melbourne to sunny Queensland hoping to live out his last days in relative contentment.

No emotion goes better with Summer than love, the awkward first stirrings of which are perfectly captured in Summer of ’42 (1971; $4.99 on Apple, Amazon & YouTube), a bittersweet romantic drama in which a hormonally robust young lad (Gary Grimes) holidaying on Nantucket Island lusts after the local girls before falling for an attractive older woman (Jennifer O’Neill). It’s a great cautionary tale about not wishing too hard for what you want, even if the object of desire makes you go weak at the knees.

Another classic, Summer-set coming-of-age tale is American Graffiti (1973; $3.99 on Amazon & YouTube). Written and directed by a pre-Star Wars George Lucas and set in 1962, we follow a group of small-town teens across one hot summer night replete with love, lust, testosterone, drag racing, and property destruction.

But how can you talk about Summer love and not mention Grease (1978; Netflix; Stan; Binge; Paramount+)? The film that launched countless karaoke nights and a million sing-a-long screenings has become the quintessential good girl/bad boy romance with Olivia Newton-John and John Travolta singing and dancing up a storm.

Though some consider Grease immensely annoying, the film’s longevity owes much to its ever-expanding novelty value and mixed messaging to young girls. The older it gets, the more “problematic” it becomes too politically correct fuddy-duddies, a quality that only adds to the film’s endless allure.

At the other end of the hot-weather romance spectrum is the superb tragi-comedy Forgetting Sarah Marshall (2008; Binge; Foxtel) as we witness a broken-hearted loser (Jason Segel) who holidays at the same Hawaiian resort as his ex (Kristen Bell), only to find respect for her new partner (Russell Brand) and feelings for the hotel receptionist (Mila Kunis). It’s still one of the few rom-coms brave enough to acknowledge that men have sensitive souls, too.

Where do we all head off to in Summer? Why, the beach, of course – so long as it’s not the beach in Old (2021; Prime; Binge; Foxtel), the creepfest from M Night Shyamalan where visitors to a reclusive stretch of sand slowly discover that it’s not quite the slice of paradise they were expecting.

Leonardo Di Caprio also has a less-than-ideal experience in The Beach (2000; Disney+), as do the scantily-clad Brooke Shields and Christopher Atkins in The Blue Lagoon (1980; Paramount+; YouTube $3.99), the much-maligned tale of Victorian-era cousins who are stranded on a lovely tropical island as children and grow up to become lovers. Reviled by critics, the film was a huge box-office hit and its so-bad-it’s-good value remains undiminished.

When it comes to rough experiences on beaches, it’s hard to top the ordeal Tom Hanks has in Cast Away (2000; Binge; Prime; Stan; Foxtel). The sole survivor of a plane crash, he drifts onto an uncharted island where he has to endure brutal weather, extreme isolation, and cinema’s most charismatic volleyball. For the role, Hanks famously transformed himself physically to show what four years without junk food does to a man’s body.

For harmless fun at the beach, Frankie Avalon and Annette Funicello pumped out a string of goofy, of-their-time comedies in the 1960s such as Beach Blanket Bingo (1965) and Muscle Beach Party (1964; both on Apple $4.99). Ironically, their best beach movie turned out to be the very funny self-parody Back to the Beach (1987; $3.99 on Amazon & YouTube) in which they merrily sent up the films that made them such huge stars.

So, what do we do at the beach apart from lying on towels, building sandcastles, and pretending not to stare at how other people looking in their swimsuits?

Surf, of course, the ultimate summer activity for those with a good sense of balance and no fear of getting hit in the back of the head by somebody else’s board.

Nonetheless, the ultimate surf movie remains The Endless Summer (1966; Fetch $3.99; Apple $4.99), the timeless documentary in which two young men, Robert August and Mike Hynson, live the dream of a life where they do nothing but surf as they circle the globe, beach by beach. No surf movie has ever matched the humour and passion on show here. If you’ve never seen it, you know what to do.

But what lurks beyond the beach and all the pretty waves? What of the creatures that dwell beneath those sun-dappled waters?

On the pleasant side, there are the cuter-than-cute goldfish of Finding Nemo (2003; Disney+) and the interspecies romance of Splash (1984; Disney+), in which a man (Tom Hanks) falls in love with a ditzy mermaid (Daryl Hannah).

On the nasty side, we’ve got the fun-filled spectacle of Piranha (2010; Stan), the girl-versus-shark lark of The Shallows (2016; Binge; Stan), the epic man-versus-whale tussle with Moby Dick (1959; YouTube $4.99) and The Old Man and the Sea (1958; Amazon & YouTube $4.99), in which Spencer Tracy returns so totally exhausted from his harrowing ordeal with sea creatures that when he drops onto his cot for some well-earned rest you almost fall asleep in sympathy.

Yet the terror that summer on the sea can be was never captured with more power than in Steven Spielberg’s Jaws (1975; Netflix; Prime).

Easily the most terrifying film about fishing ever made, Jaws caused a spike in shark sightings when it was released, its images of people panicking as they storm out of the water in fear of becoming shark food having long seared into the collective memory.

Still one of the most popular films ever made – it has taken more than $2.6 billion in adjusted dollars – Jaws has a very special association with summer.

It was the first Hollywood film to enjoy a wide release, its opening in cinemas across the US at the same time, and was designed to capitalise on its historically huge marketing campaign and so maximise ticket sales in its first few opening weekends.

Thus was born the concept of the summer blockbuster. Up until then, winter was regarded as the prime season for big films. Paving the way for such 1970s mega-hits as Star Wars, Superman, and Alien, Jaws was the game-changer that taught the world that when it came to movies, summer now mattered.

And the multiplex has never been the same since.

Helpful hint: The suggestions about where to see this selection of Summertime films is far from comprehensive. For more options just tap any title into Google, Amazon, justwatch.com or YouTube.