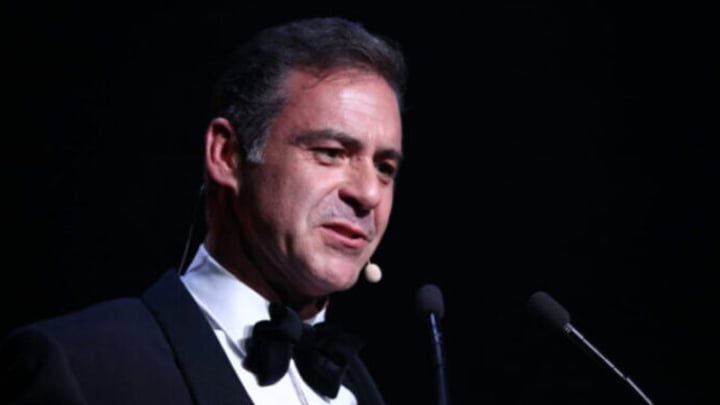 O’Keefe's latest appearance in court comes after he was arrested and charged for allegedly breaching the conditions of his bail in November. Source: Getty Images.

Troubled former game show presenter Andrew O’Keefe has fronted court yet again for a brief hearing in which a date was set for the 51 year old to contest assault charges.

Earlier this year O’Keefe was arrested and charged for the alleged assault of a woman in a Sydney apartment.

Police alleged that a man grabbed the woman by the throat, pushed her to the ground and punched her.

O’Keefe was arrested on Thursday, January 27 in relation to the incident and was later charged with two counts of ‘intentionally choking a person without consent’, three counts of ‘common assault’ and one count of ‘assault occasioning actual bodily harm’.

A 50yo man is due to appear in Central Local Court tomorrow on six charges over the alleged assault/choking of a woman in the CBD on Tuesday. https://t.co/sUIMRHqMuK

“A verbal argument ensued between the pair, before the man allegedly assaulted the woman — grabbing her by the throat, pushing her to the ground and punching her,” a police statement said.

“The man allegedly assaulted the woman a second time — punching and kicking her — before she left the unit.”

During the Wednesday, December 14 hearing at Sydney’s Downing Centre Local Court, O’Keefe was told to return to court on February 6 and 7, 2023 to address the charges against him.

“In relation to all of those matters, the hearing date is confirmed,” Magistrate Brett Thomas told the court.

O’Keefe’s latest appearance in court comes after he was arrested and charged for allegedly breaching the conditions of his bail in November.

According to a police statement, O’Keefe was arrested at a Vaucluse on the morning of Thursday, November 24.

“About 10.40am today officers from Eastern Suburbs Police Area Command attended a home at Vaucluse and spoke to the occupant, a 51-year-old man,” police said in a statement.

“He was arrested and taken to Waverley Police Station where he was charged with breach of bail.”

O’Keefe appeared in Waverley Local Court on Thursday afternoon where the court heard that he had allegedly failed a drug test.

O’Keefe’s barrister Sebastian De Brennan argued that the drug test could have possibly been contaminated.

Outside of court, O’Keefe addressed a throng of reporters where he vented his frustration with the legal system while defending himself against the charges.

“You don’t get to hear the story,” he told reporters.

“The thing about the justice system is that we get no time to prepare as the defendant.”

He was then asked about the alleged failed drug test.

“That’s what we discovered in court today, that there’s a high probability of contamination,” he replied.