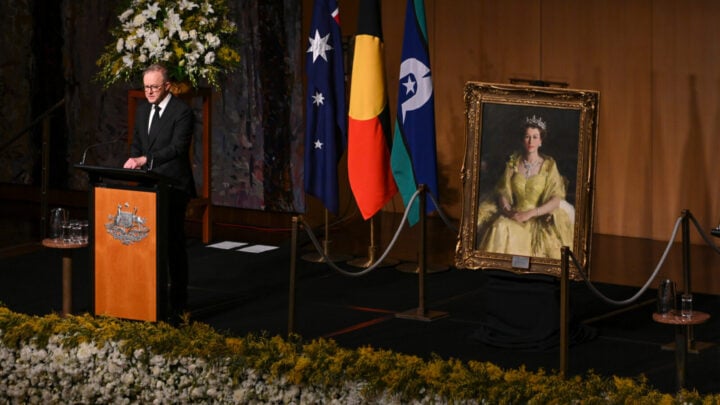 Prime Minister Anthony Albanese delivered his tribute to the Queen, telling those gathered that "the Queen lived her life with an air of dignity and grace that will be remembered for centuries to come". Source: Getty Images.

Following the history-making state funeral in England to honour the late Queen Elizabeth II, Australians were provided with the opportunity to honour the life and service of Her Majesty during a National Memorial Service held in Canberra on Thursday, September 22.

Beginning with a minute’s silence the ceremony which was broadcast live across the country saw politicians and official representatives gather at the Great Hall at Parliament House to mourn the late Monarch as members of the public honoured the Queen in their own way as part of the one-off public holiday.

Following their recent return from the Queen’s funeral in London, Prime Minister Anthony Albanese and Governor-General David Hurley joined Opposition Leader Peter Dutton, Members of the Federal Parliament, and State and Territory Ministers for the service that was opened by former Sunrise host Melissa Doyle who served as Master of Ceremonies.

Prime Minister Anthony Albanese delivered his tribute to the Queen, telling those gathered that “the Queen lived her life with an air of dignity and grace that will be remembered for centuries to come”.

“We gather today, around our nation, to offer Australia’s thanks for an extraordinary life dedicated to service, faith, country and Commonwealth,” Albanese said.

“Her Majesty Queen Elizabeth II was the longest-serving monarch in the history of a centuries-old institution. Her reign spanned more than half the life of our modern Federation.

“And we proudly honour her memory today on a continent home to the world’s oldest continuous culture – paying respect to traditional owners and elders past, present and emerging. This national day of mourning salutes a sovereign who served our whole country – and sought to know it too.

“Through 16 tours across seven decades, Queen Elizabeth visited and connected with every part of Australia. Millions of fleeting interactions, still fondly recalled.

“So many Australians have shared their memories – of a kind word, a gesture of respect, or a thoughtful act of grace in an always-busy day.

“With Prince Philip at her side, The Queen embraced the scale of this vast nation: the breadth of our continent, the depth of our people’s hearts, the warmth of our humour.”

We gather today in Parliament, and around our nation, to offer Australia’s thanks for an extraordinary life dedicated to service, faith, country and Commonwealth. pic.twitter.com/7VT19JeHYp

Albanese went on to praise the Queen’s “quiet dignity” and her inspiring example.

“For so many, for so long, The Queen was a rare and reassuring constant in a world of change. In an age of performative celebrity, The Queen embodied quiet dignity,” he said.

“She stood for things we loved and admired most about our own parents and grandparents. Their decency, their wisdom, their patience, their work ethic, their instinct for service above self.

“And as the traditions and formalities of the past two weeks come to a close – I think something all of us can do to meaningfully honour the life of Queen Elizabeth in an ongoing way is take inspiration from her example.

“Monuments to The Queen dot our landscape, the name of Elizabeth lives in nearly every town. Perhaps the greatest tribute we can offer her family and her memory is not a marble statue or a metal plaque.

“It is a renewed embrace of service to community. A truer understanding of our duty to others.

“A stronger commitment to respect for all. This would be a most fitting memorial, to a magnificent life.

“May Her Majesty Queen Elizabeth the Second rest in eternal peace.”

Opposition Leader Peter Dutton said that “never in modern history has there been a more dignified monarch, a more dutiful leader, or a more decent human than Her Majesty Queen Elizabeth II” during his remarks to those gathered for the service.

“If ‘grief is the price we pay for love’, then the outpouring of global grief in these past fourteen days speaks to just how much she was loved.

“Hers was a truly extraordinary reign – the longest serving monarch in British history.

“More than one-hundred countries visited, including our own on sixteen occasions.

“And many thousands of people met, all of whom she listened to attentively and treated as her equal.

“Fate thrust a life of duty upon Elizabeth, but to duty Elizabeth would dedicate her life.”

Dutton spoke of the sense of familiarity Australians felt with the Queen despite many never having met her personally.

“Many Australians had the honour to meet The Queen. Many caught a glimpse and exchanged a wave when she toured Australia,” he said

“Most of us, of course, never met her. And yet, she was familiar to us all.

“On our radios, our televisions, our digital devices, she was a constant, comforting and confidence-inspiring presence.

“We gravitated to her gentle demeanour. We were drawn to her radiant smile. And we were captivated by her wise words.

“More than anything else, I think we will remember our dearly departed Sovereign for steadfastly embodying humanity’s very best virtues and values: service and sacrifice, fortitude and humility, grace and generosity, forgiveness and empathy.

“Virtues and values, of course, which we all admire, but which are under pressure in the modern age.

“Perhaps our Queen’s greatest triumph will be a renaissance of these virtues and values as we remember her evermore.

“May she rest in peace.”

Governor-General David Hurley also spoke during the service, revealing that the day of mourning “is a sad day”.

“The passing of The Queen, while we knew it to be inevitable, has still struck with an impact that has exceeded any expectation here in Australia, in the United Kingdom and indeed across the globe,” Hurley said.

“Amongst the sadness, it is also a day of reflection and celebration. A day to recognise what it means to have lived in the Second Elizabethan Age. To ponder what lessons we can and should draw in the months and years to come.

“History will remember few like Queen Elizabeth The Second. While we mourn her passing, we are grateful that we have witnessed — and benefited from — her remarkable life.”

Today, we celebrated and remembered Her Majesty The Queen, Elizabeth the Second’s life and service, as well as the fondness she had for Australia in a National Memorial Service at Parliament House. pic.twitter.com/jPaxCDSceP

Serving as the centrepiece of the ceremony was the iconic 1954 Sir William Dargie painting of The Queen. It was surrounded by Australia’s floral emblem, the golden wattle, as well as sweet peas and dahlias, some of the Queen’s favourite flowers.

Her Majesty Queen Elizabeth II opened Australian Parliament House during her Royal visit in May 1988 alongside The Duke of Edinburgh, Prince Phillip.