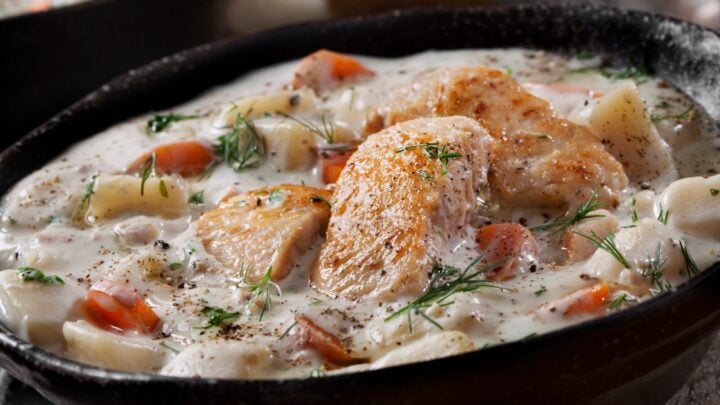 What defines a ‘chowder’ is up for debate, especially in the United States. Ingredients vary from region-to-region, some include cream others don’t. The word ‘chowder’ is likely a derivative of the French word ‘chaudiere’, which literally means ‘boiler’ and refers to the large pot used to boil fresh seafood (and especially shellfish).

For simplicity’s sake, we’re going to say that the chowder of today is a recipe that is usually creamy in texture and includes potato and seafood. The consistency is somewhere between a soup and a stew. Whatever your preference though, we’re sure you’ll agree that it’s delicious.

I’ve avoided making such dishes in the past for a couple of reasons. The first is that I’m not particularly confident with shellfish and the second is that I’ve always considered ‘chowder’ to equate to ‘time consuming’ and when it comes to creating in the kitchen, I like my meals to be 98 per cent ‘quick and easy’. (There was that one time I did a five-course degustation for some family friends, but I digress …)

This salmon chowder recipe, however, is substantially easier than a traditional shellfish dish. The ingredients are all easy to get your hands on (and in the absence of fresh salmon, tinned is totally fine), it cooks in one pot, you’ll have it ready to plate in about 35 minutes, and you’ll enjoy it as a meal on it’s own.