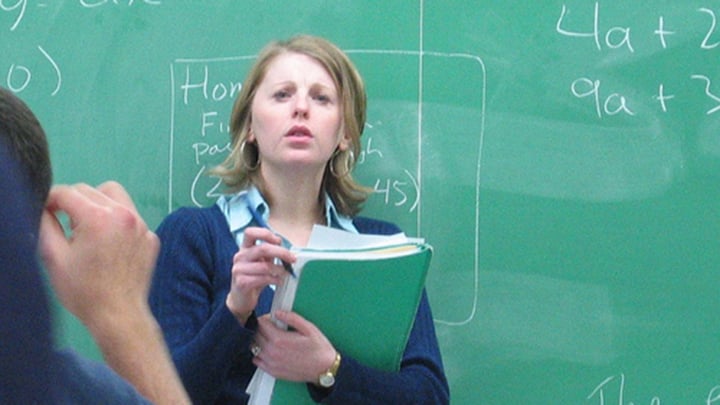 A first-grade teacher, Ms Brooks, was having trouble with one of her students. The teacher asked, “Harry, what’s your problem?”

Ms Brooks had enough. She took Harry to the principal’s office.

While Harry waited in the outer office, the teacher explained to the principal what the situation was. The principal told Ms Brooks he would give the boy a test. If he failed to answer any of his questions he was to go back to the 1st grade and behave. She agreed.

Harry was brought in and the conditions were explained to him and he agreed to take the test.

And so it went with every question the principal thought a 3rd grader should know.

The principal looks at Ms Brooks and tells her, “I think Harry can go to the 3rd grade.”

Ms Brooks says to the principal, “Let me ask him some questions.”

The principal and Harry both agreed.

Ms Brooks asks, “What does a cow have four of that I have only two of?”

Harry, after a moment: “Legs.”

Ms Brooks: “What is in your pants that you have but I do not have?”

The principal wondered why would she ask such a question!

Ms Brooks: “What does a dog do that a man steps into?”

The principal sat forward with his mouth hanging open.

Ms. Brooks: “What goes in hard and pink then comes out soft and sticky?”

The principal’s eyes opened really wide and before he could stop the answer, Harry replied, “Bubble gum”.

Ms. Brooks: “What does a man do standing up, a woman does sitting down and a dog does on three legs?”

The principal was trembling.

Ms. Brooks: “What word starts with an ‘F’ and ends in ‘K’ that means a lot of heat and excitement?”

The principal breathed a sigh of relief and told the

teacher, “Put Harry in the fifth-grade, I got the last six questions wrong… “