The wake-up call Andrea is glad she heard 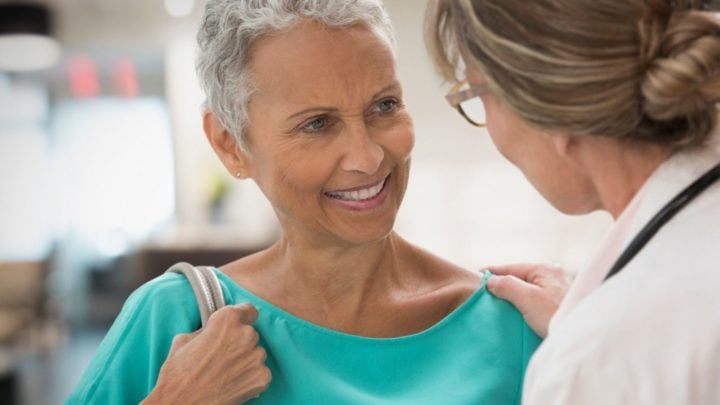 Losing your hearing doesn’t have to be an inevitable part of ageing. Picture posed by models.

Healthy ageing is important to many Australians looking to enjoy a high quality of life well into their retirement and beyond. One part of healthy ageing that many may forget is their hearing. Andrea, whose surname we’re withholding to protect her privacy, found the loss of her hearing was becoming a barrier to living her day-to-day life and was the “wake-up call” she needed to start taking her hearing seriously.

Andrea first noticed a deterioration in her hearing 20 years ago. Within a few years, her hearing loss had worsened to the point that hearing aids weren’t enough to counteract the problem. This in turn impacted her ability to work, forcing her to stick to short-term jobs with the rare employers who were willing to work around her hearing difficulties.

“Still, I could only find work that was well below my capacity and by constantly moving to new places,” she recalls.

By 2012, Andrea often had to communicate with people by asking them to write their responses into a notebook because she was unable to hear them. Using the phone was impossible. So was holding down paid employment. She says she often came across as “rude or silly” because she spoke over people in conversations when she didn’t know they were talking or misunderstood what they’d said.

But that all changed when she met a man with what she describes as a ‘gadget’ attached to his head.

“We were in his noisy shop and he was hearing much better than me, and using the phone,” Andrea says. “He told me the gadget was a cochlear implant and that I should look into it.”

Invented by Australian surgeon, Professor Graeme Clark, multichannel cochlear implants are designed for people whose hearing loss is too severe for hearing aids to be of assistance. With cochlear implants, adults living with hearing loss could be able to hear the sounds they’ve been missing, such as their favourite music and conversations with family and friends.

Now, the Graeme Clark Foundation builds on Prof Clark’s legacy by raising funds through the Sounds of Simone in India campaign to treat children from disadvantaged backgrounds in India who otherwise would face a life impacted by hearing loss.

“Graeme’s vision was a collaboration between the medical sciences and engineering to achieve the impossible and invent a cochlear implant,” Grant Holley, the chairman of the Graeme Clark Foundation, says.

“It can be hard for people whose senses don’t work to enjoy the simple things that people who can hear do. Everyone deserves a chance in life to reach their full potential and we want to help people have the same opportunities they would have otherwise had if they had these senses.”

Andrea got her first cochlear implant, which was placed in her left ear, in 2015 and made a speedy recovery.

“Within six months, my hearing was back to the standard of moderate hearing loss, and the sound was so much more pleasant than with the powerful hearing aids I had been using,” she says. “I spent the next year with a big grin on my face, grasping all the opportunities that I’d missed out on due to my hearing loss, and feeling useful again.”

Three years later, Andrea had an implant placed in her right ear, which, coupled with her first implant, helps her better detect where sounds are coming from and experience greater sound clarity.

“If you know anyone who is losing their hearing, do pass on the information about implants,” she says. “It really is important for people to know that they are not facing the misery of being permanently deaf.”

“I had the top-of-the-range hearing aids and that was not enough. It’s very, very important that people know that that is not the end of the road. There is something else out there. Thank goodness I did it, it’s given me back my life.”

As an awareness ambassador for Cochlear, Aussie cricket legend Brett Lee is just as passionate about spreading the word that hearing loss is a treatable condition.“I often encourage my own family members to have their hearing checked and seek out treatment that can help them,” Lee says. “We need to encourage people to forget about the stigma, have their hearing checked and deal with the fact that they are struggling to hear.”

Get started with a quick online quiz

Most forms of hearing loss can be treated. But since hearing loss is often gradual, many people put off getting their hearing checked and miss out on treatment that could make their lives so much better.

This may sound like a sweeping statement but it’s fact – according to the World Health Organization one in three people aged over 65 live with hearing loss. Almost half of those who say they’re aware they have some level of hearing loss haven’t had their hearing checked, according to The State of Hearing Report 2019 by Cochlear.

Instead, the way most people deal with the condition is to adjust their life: by turning up the volume of the TV, avoiding noisy environments and asking their loved ones to repeat themselves. And so they risk the many serious health and wellbeing impacts hearing loss can bring, including falls, damaged relationships and social isolation.

As Lee says, the first step to regaining your quality of life is to have a hearing test. You can take a quick hearing health quiz online to check if you may be a good candidate for a hearing test.

Andrea says that it may help if people who are reluctant to have their hearing tested remember that their inability to hear is a loss to their family and friends too.

“It is a wonderful thing for them to be able to have a conversation with you again, to be relieved of the stress of trying and failing to communicate, of misunderstandings, being forced to make notes,” she says.

“Losing hearing is isolating. They need to know that deafness is not the end – the black hole of loneliness that they fear is all they have left in life. We humans are social animals. There are few things better we can do for others than listen to them.”

Always read the instructions for use. Not all products are available in all countries. Please contact your local Cochlear representative for product information. Cochlear™ Nucleus® implant systems are intended for the treatment of moderately severe to profound hearing loss. Views expressed are those of the individual. Consult your health professional to determine if you are a candidate for Cochlear technology.

Does someone you love have hearing loss? Have you encouraged them to have their hearing tested?