Expert answers: The most effective ways to treat asthma 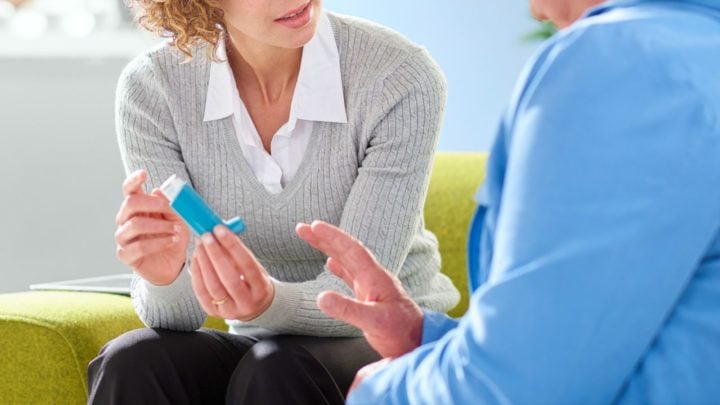 There are effective ways for Baby Boomers to treat mild, moderate and severe asthma. Source: Getty

Spring has sprung around Australia and while the warmer weather is welcome news for many who enjoy the outdoors, it can also spark fear in the 2.7 million Australians living with asthma. In simple terms, asthma is a chronic inflammatory disorder which causes the airways in the chest to narrow and results in worrying symptoms including wheezing, breathlessness and tightness in the chest.

“There’s a high prevalence amongst older Australians with asthma,” Michele Goldman, the CEO of Asthma Australia, tells Starts at 60. “About 12 per cent, or one in eight Australians over 65 have asthma.”

While there’s been plenty of research over the years to investigate what actually causes asthma and to find a potential cure, experts still don’t fully understand the underlying causes of the respiratory condition, but do know that genetic, environmental and lifestyle factors can increase a person’s risk. As such, proper management is important to keep symptoms at bay and to reduce the risk of a flare-up, but treatments vary depending on whether a person is living with mild, moderate or severe asthma.

Most people with moderate or severe asthma are put on anti-inflammatory preventer regimes because they’ve either been hospitalised or have experienced severe symptoms and flare-ups. People with mild asthma usually experience more infrequent symptoms, but this doesn’t mean mild asthma isn’t life-threatening. There are around 39,000 hospitalisations in Australia each year where asthma is the principle diagnosis, while around one million people currently live with mild asthma.

“Just because your asthma is mild, it doesn’t mean you should underestimate its seriousness and you should be diligent in taking the steps you need to ensure you’re managing your asthma well,” Goldman says. “20 per cent of all death from asthma are amongst people who have a mild form of the disease, so it can still be life-threatening.”

While preventer medication is effective in reducing underlying inflammation in the airways, many people simply rely on their blue reliever medication and only treat symptoms with this when they’re feeling unwell by taking a few puffs of their reliever. This type of medication is fast-acting, reduces muscle restriction and people can often feel a benefit straight away, but Goldman warns that it’s only a Band-Aid solution, that it doesn’t reduce underlying inflammation and the effect of the reliever wears off after a few hours.

“They just go around in this vicious cycle where they continue to have symptoms because of the underlying information and continue to put themselves at risk of a flare-up,” Goldman says. “If you do have symptoms regularly, you should be talking to your doctor about whether you need a preventer medication because that will help keep your airways healthy and reduce your risk.”

Another drug called Symbicort has also been developed and could change the way people with asthma manage the condition. It’s a combination therapy that combines both the preventer and reliever medication in one to reduce symptoms and inflammation. While it had previously been offered to people with moderate and severe asthma, the Therapeutic Goods Administration recently announced that it could also be used by people with mild asthma as needed.

“That’s a really big shift. To date, preventer medication is something people have been told they need to take on a daily basis and getting Symbicort indicated in this new way means that there’s a new treatment option for people with mild asthma where they’re not wanting to take medication on a daily basis,” Goldman explains. “They have a treatment option available to them which will help address the underlying inflammation when they’re treating their symptoms, rather than just relying on their blue reliever, which isn’t effective in doing that.”

Because asthma is a complex disease and varies from person to person, it’s always best to talk to a GP or pharmacist about which treatment is going to be most effective for individual circumstances. Similarly, there are hundreds of different triggers including hay fever, pollen, smoke, bushfires, mould and the flu which can impact asthma sufferers in different ways. As such, it’s also important to set up an asthma action plan with a health professional.

Action plans help those with asthma recognise flare-ups or worsening symptoms and advises them on what to do when this happens. The plans are individual, written by a GP and include information about doses and frequencies of medication, how to adjust treatment in the event of an exacerbation, managing severity of attacks, identifying warning signs and how exactly to seek urgent medical help if needed.

“The best defence is an offence. We would encourage people to be on preventer medication if they have symptoms,” Goldman says. “They should always carry their reliever medication on hand. People move around and smoke shifts, wind patterns change and the direction and concentration of pollen in the air might change, so you never know when you might have symptoms.”

It’s also important to regularly talk to a GP about whether you’re on the right preventer, that the dose of medication is still correct and that the asthma action plan is up-to-date.

Do you have asthma? How do you manage your symptoms?