‘Does our health care system really care? I’m starting to think not’ 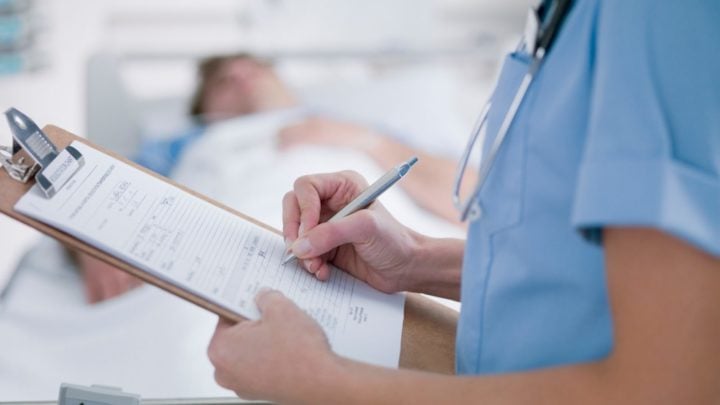 A recent experience has left this writer feeling like there is not enough adequate care in our health system. Source: Getty Images

I had a call from my son’s partner recently. He is extremely sick and had been taken to hospital by ambulance. It was thought he would probably be there for a few weeks so I booked my flights and arranged a hotel near his hospital. I was to fly to Sydney the next day and would get a taxi (shuttle) to the hotel, drop off my cases and visit him in hospital.

The night before the flight I received a call that he had been discharged from the hospital and sent home in his partner’s care, so I cancelled the hotel and booked one nearer to his home. This story is not about hotels or shuttles or locations to hospitals. It is about the lack of health services in New South Wales, Australia, and the care of the medical profession. Not necessarily nurses or ancillary staff, but the senior medical staff that sit in the background and take no real part in the actual care of patients but may take a more restricted look at the budget and what can be afforded on the budget.

A patient may require ongoing care in either the hospital or their home, it may mean they need a daily visit of say 2-3 hours per day, but the consideration is not what they need but what we can afford. Do they have private health insurance? No, then sorry but we can only give you one-quarter of what you need, so you will have to arrange something other than the health service.

In this case my son has fibro myalgia, severe lymphedema, leg infections and ulcerated areas. I would include pictures, but I believe most people could not take well the state of his wounds, nor would they believe he was not kept in a hospital for anymore than three hours. He arrived by ambulance and was sent home in his partner’s small car. He had no shoes on his feet (he cannot wear them anyway). He was not wheelchaired to the entry, but had to walk from the ward. He did this with two walking sticks and the assistance of his partner. The doctors did not believe he was a satisfactory person who deserved health care within the hospital … How do I know this? It was by what was written on the discharge documents.

To give some indication of his condition, my son’s legs are about five times the size of the average person. He has about 40 kilograms of fluid on his legs (possibly more). He has ulcerated sores (that are spreading) that cover the rear of his calves. From the back of his knee to his ankle and around to the front of his legs the skin is peeling and there is fluid leaking from the open wounds. This is on both legs. The wounds are also spreading to the rear of his thigh on the left leg. He has a great deal of pain walking any sort of distance, but obviously that was not the concern of the hospital staff.

He has two nurses visit him twice per week to change dressings. These two professional health carers would take about 1.5 hours changing his dressings. He would have a shower just before they arrived, so the time frame was not too long before the dressings were replaced. The shower was one that was in a bath tub, so he had to stride to the bath, then shower under a fixed shower head, which hopefully would adequately wash the infected area (obviously this did not work as the health care workers stated the wounds were getting worse). All of this was under very strong pain relief. They decided it would be better to go the hospital and get professional ongoing help.

Because of the massive amount of fluid (lymphedema) on his legs, my son has to have compression on his legs to reduce the swelling. Because he could not take the pain on his sores he could not adequately perform this process. It was noted on his discharge that since he was not compliant with this process he would either loose his legs or die. And they sent him home! They did not increase the number of visits made by medical professionals. In fact they did nothing.

His partner helps him with the showering then takes 2 hours to change his dressings five times a week whilst the NSW government through its agents provides two days a week and allows him to sleep on a chair with an ottoman to rest his feet and legs on. They provide no disability services and since he has been trying to be placed on disability for three years he gets no assistance other than a small pension (which he appreciates), but he could do with some social services that could alter the shower head and possibly provide a bed that would accommodate his body in a proper manner. It would also help if the nurses could visit five days a week

Back to the story. We arrived in the morning and even though my wife (his mother) is a nurse she broke down when she saw the state of his legs. We were fortunate enough to see the health workers and we assisted with the shower and they changed the dressing. My wife spoke to them about what had been happening and the previous day at the hospital. She then contacted some people who are stationed in Darwin and other health professionals in Queensland. They suggested a course of action, which involved a hospital close by. She called an ambulance to take him there. The ambulance crew — Callum and Mark — were magic. They arranged to be taken to our preferred hospital even though it was not part of their district. They did everything they could to make my son comfortable even though their ambulance was not an MVP. They drove with consideration for their passenger and got him to the hospital in about an hour. We cannot thank these two guys enough.

Once we arrived at the hospital my son was eventually transferred to the Acute Assessment Unit. This process took until just after midnight. Once he was settled we left so we would be fresh for the next morning. We arrived back at our hotel at about 1:30pm. We returned to the hospital at around 10am the following day. We spoke with a doctor so he could get all the facts. We were told my son would not be discharged, but the conversation did not go the way we’d hoped it would. It was intimated that my son could not stay at the hospital longer term and that if he needed 24-hour care we would need to consider sending him to an aged care home. He is only 34 years of age. We were asked how much we were willing to pay, so it became obvious that this doctor did not see any long-term care for my son.

The doctor had never seen anything but a photograph of his wounds, he had never seen anyone change his dressings nor had he seen anyone shower this young man. In fact in my opinion he did not attempt to give him his duty of care. I wondered if the Hippocractic Oath still existed because this guy seem to have no intention to offer the type of care that was needed nor was he willing to examine the possible services that could be available. His concern was “what about the cost we cannot do this in the budget”.

After this meeting, the nursing staff assisted in changing my son’s dressings, though my wife showered him and removed his other dressings. He spent the next three days in hospital. He saw a dietician, physio, occupational therapist and social worker. We’d hoped he would also be seen by a podiatrist, but that did not happen before he was discharged.

This is an ongoing story, but I have a number of questions. Does our health care system actually care? Are governments — state and federal — providing sufficient funding to take care of its people, or is it all just hyperbole? Are health care doctors given a budget and is it a requirement they they stick to it? Is this why they turn patients away? I wonder if they would allow their son to endure what my son has currently undergone in trying to receive medical treatment. I’d like to think not.

Have you encountered any issues when receiving medical treatment at a hospital? Do you have concerns about the quality of care you or a loved one has received by medical professionals?