Short-term stay: How renewable interment rights work and what they cost 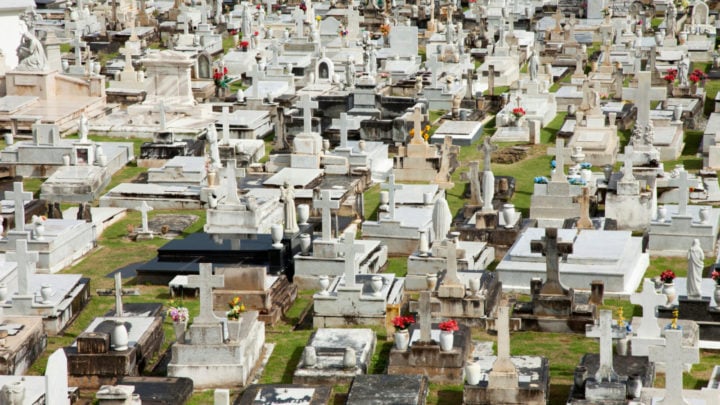 With cemeteries becoming increasingly crowded, operators have had to look into how to remain sustainable. Source: Getty.

It seems everyone is all about fuss-free cremation, biodegradable coffins and the like these days, which is a good thing – because times aren’t easy for some cemeteries. Burials require a reasonable amount of free space, which is increasingly rare in urban areas, and as a result of overcrowding, the availability of burial plots is decreasing as prices shoot up.

One solution that’s getting some attention is a wider introduction of  renewable burial plots, to encourage a more sustainable future for both the land and the funeral industry . Slowly, this option is being implemented around the country – but what are renewable burial plots and are they really a viable option?

What is a renewable burial plot?

The idea of ‘digging up’ a buried loved one may sound grim but in reality, renewable burial plots have nothing to do with exhuming bodies against the will of the deceased or their loved ones and everything to do with giving people a choice between staying in their spot forever (at a higher purchase cost), or handing it over to someone else many years later (at a lower cost).

The concept was once dubbed ‘rent-a-grave’ but renewable plots have become more common solution to increasing burial space, while also more cost-effective interment option for burial buyers. New South Wales, South Australia and Western Australia current offer two kinds of rights for people to chose from when it comes to burials.

What are the types of interment rights?

An interment right is a contract that allows a person to be buried on a particular site. The holder can chose who they want to buried in the plot but, despite having the right to the land, they do not own it. Interment rights apply to burials in the earth, as well as in mausoleums, crypts and vaults. They also apply to burials of cremated remains in the earth, a columbarium or niche wall.

These rights typically come in two forms: perpetual and renewable. Perpetual rights are the more traditional form, which offer people the ability to purchase rights to a plot and have the remains be undisturbed for as long as the foreseeable future permits. (Depending on the kind of plot purchased – for instance, double-depth plots can hold two coffins in the one grave – there could still be the chance of additional interments, as long as it doesn’t change the circumstances of the current perpetual plot.)

Renewable rights means rights to the burial plot are purchased for a specific period before requiring an additional payment for renewal or expiring. The plots can be acquired for a minimum of 25 years to a maximum of 99 years before another payment is needed. This kind of interment right is completely optional and has no impact on plots that have already been deemed as perpetual.

What happens when the renewable term is up?

At the end of the initial term of a renewable plot, for an additional cost, right holders can renew the plot for a minimum of five years as long as the accumulated time since it was purchased doesn’t extend beyond a total of 99 years. However, plot holders shouldn’t be worried about forgetting expiration dates because it’s generally up to the cemetery operator to contact them within the 12 months prior to the renewal date.

If the plot isn’t renewed by the rights holder, and the remains have been in the plot for a minimum of 25 years, cemetery operators must wait a further two years from the date of renewal, and then have the right to reuse the plot.

Reusing a plot generally involves removing the remains and placing them in an ossuary box, which can then either be re-interred at a greater depth, placed in an ossuary house, or in the case of cremated remains, returned to the rights holder’s family or scattered in the cemetery.

What does it all cost?

According to the interim report by the Independent Pricing and Regulatory Tribunal (IPART), the current price in NSW for basic perpetual interment rights is $6,691. This cost includes $2,012 for rights to the land and $4,479 for perpetual maintenance, but doesn’t include the costs of the burial itself or the funeral service.

In NSW, the initial payment for a renewable interment right for a 25-year term is $3,296 – about half that of a perpetual right. This payment includes only $602 for rights to the land and $2,693 for maintenance. Renewable rights also include a $506 end-of-tenure cost that is paid out when the term of burial ends, bringing the total cost of a 25-year term to $3,802.

Renewal adds another cost, however, that varies with the chosen term extension. For example, an initial 25-year term can be renewed for anywhere between five and 74 years to make a total of 99 years. An additional 25 years in the plot would cost right holders $4,530, including end-of-tenure costs if no more renewals occur.

While both have their advantages, despite the name, renewable interment rights are clearly only cost-effective if they are not actually renewed. But for those unconcerned about what may happen to their mortal remains over the long term, renewable rights can be an attractive burial option.

Do you feel strongly about what happens to your remains?