The lost weekend: What happens when football season is over? 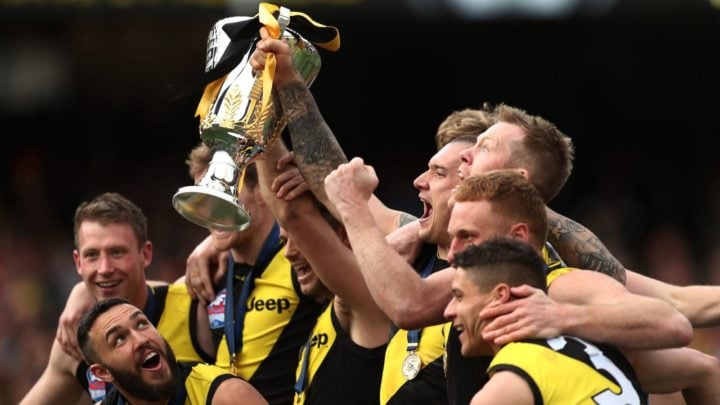 Richmond Tigers players celebrate with the Premiership Trophy after victory in the 2019 AFL Grand Final match between the Richmond Tigers and the Greater Western Sydney Giants at Melbourne Cricket Ground on September 28. Source: Getty Images

Oh no, it is time for the lost weekend again. You have to visualise this. Imagine the Great Australian male, about 65 years old, facial fungus, grey hair, more than slightly obese. Let’s call him Alan. He wakes up on Saturday morning, really early. Alan groans, his wife turns away in their comfy bed.

Alan sits on his side of the bed and looks through the blinds. He holds his head in his hands, in despair. What is wrong? This is the weekend after the football Grand Final. Man and boy, Alan has either played football, listened to football, viewed football, attended football matches, supported both local and league football. Now he realises there is no football.

Alan’s local team did okay this season, but that competition is finished. In the major league, his team had another totally forgettable season of non-achievement, and did not make the finals again. Even worse than that, the opposition team Alan despised and hated the most won the flag, so he has spent the week miserably hearing about their celebrations.

But it is all over for another year. His useless team he so loyally supports shall not attempt to play football for some months. Alan dresses in the fresh dawn, and shambles to the kitchen, makes his own toast and tea. He takes two Panadol, but there’s still no football. Alan turns to gardening at six am. His lawn mower roars and wakes up all the neighbours. That takes him to 6:30 am, but there is still no football.

Alan takes his wife breakfast in bed, and then takes their ageing Labrador for a long walk. By the time he comes home it is only 7:30am on this lost weekend with no football. Alan takes the dog for another walk, poor old thing. The dog limps along beside him. They reach home and the old Lab hides under the bed, with a sigh. No more walks this weekend.

Alan wanders indoors, and asks his wife what time lunch is. She makes him hang the washing on the line, but there is still no football. By 11am, his wife is fully aware of Alan’s post-football syndrome, so sends him off for the day, with his fishing rod. Alan hates fishing. He calls in to the fish and chip shop and brings home some flake and chips. Then he asks his wife what is for tea.

Alan heads off again, he has had a brainwave. He is going to join a gym and get a fitness program going. Sad, but true, there is no football, and it is only 2pm on the first day of the first lost weekend after the Grand Final. Alan pays for an expensive gym and then gazes in some misery at the super joggers, clad in lycra shorty shorts, who won’t let him on the treadmills.

Alan wanders home, his butt looks big in everything, slightly disenchanted with the gym. He slumps in his armchair, the garden and car, the housework, everything is immaculate. Alan moans, and takes more Panadol. There is still no football. He surfs TV channels, there is only car racing and women’s tennis. His wife has gone to visit her sister. Or anywhere.

Dateline, 3:30pm, first Saturday, the first lost weekend of no football. Alan is miserable, disconsolate, maudlin, melancholic, a solitary figure in society. An advertisement appears on the TV. A beer festival! Not far away. Yes! Is this a cure for no football?

Alan discards his unused gym shorts, puts on his best strides and polo top, swipes the contents of the petty cash tin, and heads off. The solution. Beer and bratwursts. What more could a man like Alan want? Only football, dumb question. The lost weekend, somewhere in Australia.

Do the football season ending have an impact on you? How do you fill your weekends?