The best looks served up at Wimbledon 2022 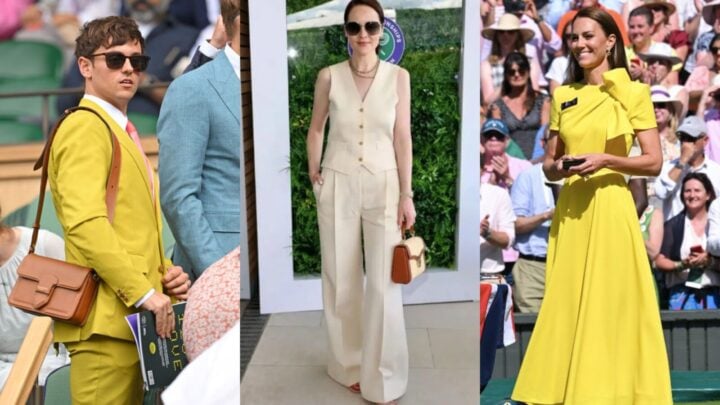 These are best looks from Wimbledon 2022. Source: Getty

When it comes to Wimbledon, one can count on the spectators to put on as much of a show as the tennis players on the court.

Every year, the tournament draws in a crowd of attendees who bring their fashion A-game; each guest, trying their hand at nailing that British summer preppy look that the All England Club has become known for.

While the matches themselves encountered some hiccups, in the stands, the stars were serving aces.

Below, Starts at 60 rounds up the best courtside fashion spotted at this year’s Wimbledon.

The Duchess of Cambridge can always be counted on to make an appearance every year at Wimbledon. Aside from being the royal patron of the All England Lawn Tennis and Croquet Club, the sporty royal is an avid tennis fan.

Though the Duchess herself won’t be picking up a racket at the tournament, you can count on her to ace her Wimbledon looks. This year, tennis fans and royal watchers were served three gland-slam looks from Kate.

Starting off, Kate made her first appearance at the Wimbledon 2022 wearing an elegant blue and white polka-dot tea dress by designer Alessandra Rich. She then sported a bright yellow Roksana dress which she paired with classy black sunglasses and a wide-brimmed straw hat to attend the women’s singles championship. Finally, for her third look, she wore yet another polka-dot Alessandra Rich dress, this time in navy blue which also features a peplum waist.

This year’s Wimbledon also proved that waistcoats are the current fashion must-have, and Downton Abbey actress Michelle Dockery clearly got the memo in her all-ivory ensemble.

Dockery nailed her “borrowed from the boys” Wimbledon look, as she paired her vest with floor lengthed tailored pants and completed her look with an Aspinal of Londons “Mayfair” bag, big retro-style sunglasses, gold jewellery, and nude peep-toed heels.

Another celebrity who was universally applauded for her Wimbledon style was Galway native and Bridgerton star Nicola Coughlan.

Coughlan was snapped wearing fashion house Ralph Lauren‘s best as she strutted around the prestigious tennis tournament. For her Wimbledon look, the young actress wore a pastel pink check trench coast style dress with a tan belt cinched around her waist. She wore the dress’s sleeves rolled up for an effortlessly chic look and paired her outfit with nude suede pumps.

Charitha Chandra, another Bridgerton star, was also dressed in Ralph Lauren for Wimbledon. The actress who plays Edwina Sharma in season 2 of the Netflix period drama, wore a classic Ralph Lauren long-sleeved polo which she paired with white tailored slacks which featured cuffed ankles.

Chandra accessorised with a silk navy blue bandana that she used as a belt which paired perfectly with her navy strappy heels. She wore layered gold necklaces and was also spotted carrying the same Aspinal of Londons “Mayfair” bag Dockery had.

Olympic diver Tom Daley and his husband Dustin Lance Black ensured they caught everyone’s eye as they took their seats in the Royal Box on Centre Court.

For the event, Daley opted for a bright lemon yellow suit which he wore over a crisp white shirt and pastel pink and white tie-dye tie. While American screenwriter Black, wore a blue suit, teamed up with a white shirt and a blue necktie with light blue spots. The couple completed their look with similarly shaped dark sunglasses.

The Pitch Perfect actress was all smiles as she posed for the camera in her pink garment which featured elbow lengthed sleeves, a round neck and a softly pleated skirt. Sticking to her pink theme, Wilson accessoried with a rose-coloured Birkin bag and nude, gold-studded sandals.

Following an abundant display of well-dressed guests over the previous fortnight, it’s safe to conclude this year’s attendees totally aced their Wimbledon looks.