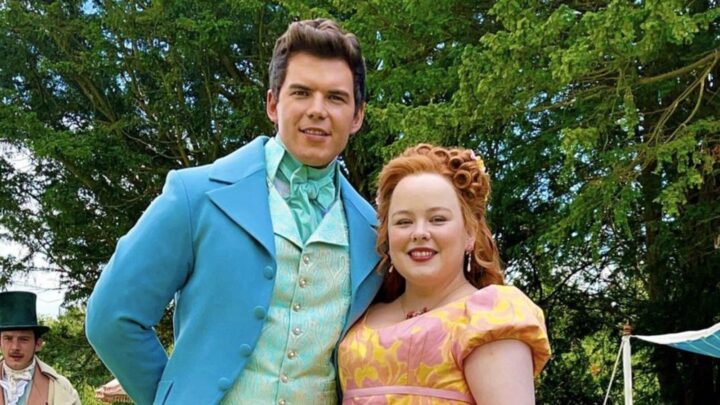 It's official! season three will focus on Penelope and Colin. Source: Instagram @Bridgertonnetflix

It’s official, Netflix’s Bridgerton is diverging from the order of the romance novels by Julia Quinn- on which the show is based- and jumping ahead to tell the story of Penelope Featherington, played by Nicola Coughlan, and Colin Bridgerton, played by Luke Newton for season three.

Coughlan revealed the news during a live Netflix event on Sunday, May 15, with Netflix and Shonda Rhime’s production company confirming the announcement on Monday, May 16.

Season 3. The story of Colin and Penelope. #bridgerton pic.twitter.com/btdWZ5Gvrv

In the book series, the third novel focuses on the second eldest Bridgerton brother, Benedict, and his cinderella-esque love story.

While Benedict won’t be finding love in the upcoming season, he still plays a”vital part” in season three, the series’s new showrunner Jess Brownell says she wanted this season’s main emphasis on watching Penelope and Colin “step into the sunshine and find each other”.

Speaking to Variety, Brownell says she feels like “it’s Colin and Penelope’s time.”

“I feel like, especially in the last season, there are these moments of tension between them where it’s like, Colin walks up to the line of almost realising that Penelope has feelings for him but doesn’t quite get there, ” said.

Fans of the show will remember the season two finale of Birdgerton, Penelope overheard Colin, the man she’s been in love with for years, says that he would never marry her.
But according to Brownwell, the next season aims to lean into the tension between the young lovers, rather than push them off for another season.
“Instead of treading water on that dynamic, we wanted to push it into their season. It really felt like the perfect moment to tee it up,” Bronwell said.
“…We’ve been watching both of these actors on our screens since Season 1, we’ve already invested in them a little bit. We know who they are as people.”
The news, however, appears to have divided Bridgerton fans, with many excited to see Colin and Penelope’s love blossom, while others were hoping to see Benedict in the spotlight.

@bridgerton @netflix glad season three is Colin and Penelope so we don’t have to drag the unmasking out longer. Queen Charlotte can only investigate so many times. Curious to see where diversity and inclusion will occur. When is Netflix signing on for all 8 seasons/ siblings?

I love Nicola Coughlan more than life but as a Benedict Bridgerton fan my heart is in bits!!!!

Like it makes sense as there’s been a lot more overt Penelope and Colin in s1&2 than in the books but my boy better get his moment to shine. https://t.co/3ACaKdJ4hX

Despite the mixed reactions to the upcoming storyline, Bridgerton’s second season has proven that this romantic period drama is more than just a one-hit-wonder.

The third season of Bridgerton will begin filming later this year with a release date yet to be set.

Are you looking forward to following Colin and Penelope's story?