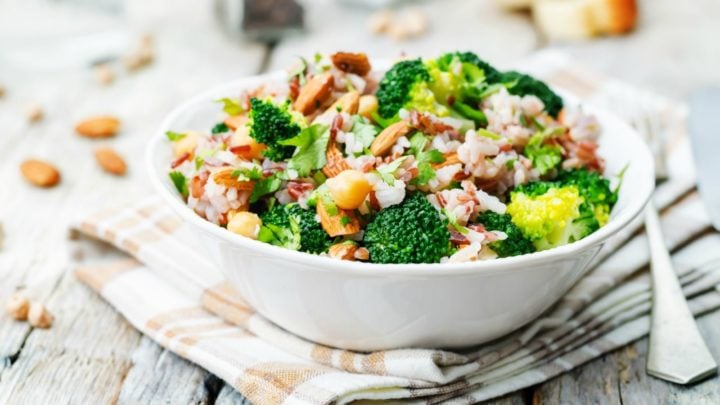 There are lots of health benefits to following a largely plant-based diet and now a new study has revealed that it could help ward off heart disease.

The study published in the Journal of the American College of Cardiology found switching from a meat-heavy to plant-based foods reduced the amount of gut bacteria associated with an increased risk of coronary heart disease (CHD).

A metabolite (a substance made when the body breaks down food) known as trimethylamine N-oxide (TMAO) is created when bacteria in the gut digest nutrients found in animal products such as red meat — and it’s been linked to a greater risk for heart attacks and heart disease. Maintaining a vegan or vegetarian diet has been found to reduce the amount of TMAO produced in the body. Generally, plant-based eating emphasises real, whole foods that come from plants, with few or no animal products.

For the study, 760 women were asked to record their eating, exercise, and smoking habits and provided two blood samples 1o years apart. Those who developed coronary heart disease were found to have higher amounts of TMAO in their blood. Further, the women with the greatest increases in TMAO had a 67 per cent higher risk of coronary heart disease.

“Diet is one of the most important modifiable risk factors to control TMAO levels in the body,” the study’s lead author Lu Qi said. “No previous prospective cohort study has addressed whether long-term changes in TMAO are associated with CHD and whether dietary intakes can modify these associations. Our findings show that decreasing TMAO levels may contribute to reducing the risk of CHD, and suggest that gut-microbiomes may be new areas to explore in heart disease prevention.”

Meanwhile, Paul A. Heidenreich, who was also involved in the study, said: “The findings of the study provide further evidence for the role of TMAO as a predictive biomarker for heart disease and strengthens the case for TMAO as a potential intervention target in heart disease prevention. The results should encourage us to continue to advocate for more widespread adoption of healthy eating patterns.”

Adopting a plant-based diet not only benefits heart health, but it can also promote healthy ageing. A recent study published in the journal Gut found eating a Mediterranean diet for a year helps curb the onset of frailty and cognitive decline. The Mediterranean diet is typically high in fruits, vegetables, legumes, fish and cereals, with less intake of dairy, meat, sugar and saturated fat.

What are your thoughts on this? Do you follow a vegan or vegetarian diet?