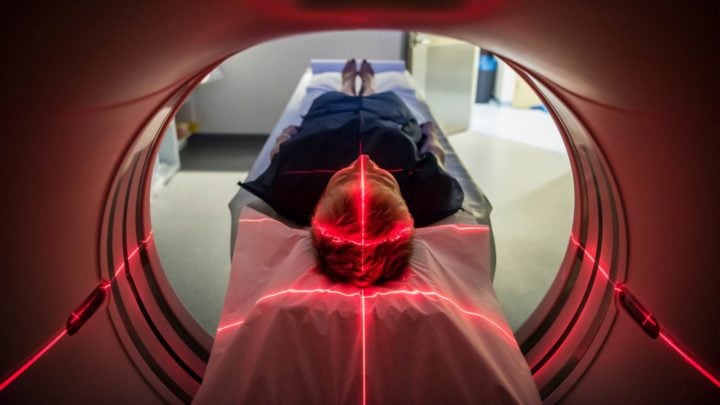 Researchers are one step closer to finding a treatment for stroke and dementia caused by damaged small blood vessels in the brain. Source: Getty

Around 15 million people worldwide experience a stroke each year, while 50 million globally live with dementia. Both conditions are caused by damage to small blood vessels in the brain and following the success of a small new trial, researchers may be one step closer to developing a treatment for them both.

New research published in the EClinicalMedicine Journal shows that medication called cilostazol and isosorbide mononitrate – which are already used to treat heart disease and angina – may also assist when it comes to treating stroke and vascular dementia.

Cilostazol works by stopping blood cells from sticking together so they can’t form clots and is known to widen blood vessels. Isosorbide mononitrate relaxes and widens blood vessels to increase blood flow.

Given there are currently no specific treatments to repair the damage to these small blood vessels in the brain that cause 25 per cent of all strokes and commonly cause memory problems and dementia, researchers hope the findings pave the way for a larger study to analyse the effectiveness of the medication.

Managing blood pressure, cholesterol and diabetes, as well as quitting smoking is the only way to reduce the risk of a stroke. As part of the latest research, patients who suffered a lacunar stroke (caused by damaged small blood vessels in the brain) took the two medications either individually or in combination for nine weeks. All participants continued their usual treatment for strokes and also completed health questionnaires, underwent blood pressure checks and had blood tests and brain scans.

The results found the drug was safe to take in the short term and improved blood vessel function in the arms and brain. It also showed signs of improving thinking skills, but more research needs to be undertaken to confirm this.

“We are delighted that the results of this trial show promise for treating a common cause of stroke and the commonest cause of vascular dementia, since currently there are no effective treatments. Further trials are underway,” lead researcher Joanna Wardlaw said in a statement.

The success of the trail was welcomed by those in the medical community, particularly because there hasn’t been new medication developed for dementia in many years.

“There hasn’t been a new drug for dementia for 15 years, so finding evidence that these cheap existing drugs could prevent dementia after a stroke would be a huge breakthrough,” James Pickett, Head of Research at Alzheimer’s Society, said in a statement. “It’s promising to see that these two drugs are safe to use and we’ll be excited to see the results of the next stage of testing in a couple of years, which will show whether these drugs can be an effective treatment.”

Do you know someone who’s been impacted by dementia or a stroke?