Put the chilli down! Spicy diet linked to greater risk of dementia 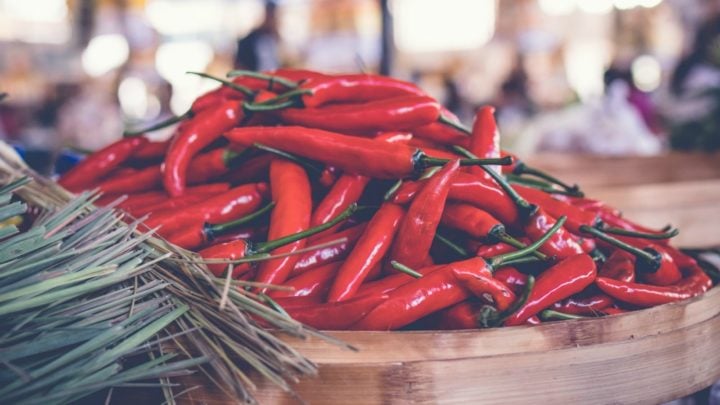 There are various causes for different types of dementia, but researchers claim spicy food could be linked to the cognitive condition. Source: Pexels

Around 50 million people worldwide are living with dementia and while there are various causes for different types, new research claims that a spicy diet could be linked to the cognitive condition.

Dementia is a collective term used to describe an array of symptoms associated with cognitive decline such as memory loss, confusion and behavioural issues and while adding an extra kick of chilli sauce or including some jalapenos in a meal may seem harmless, researchers believe spicy foods could cause faster cognitive decline.

The latest study, published in the Nutrients Journal, analysed the 15-year China Health and Nutrition Survey of 4,582 Chinese adults over 55.

Researchers found evidence of faster cognitive decline in people who regularly ate more than 50 grams of chilli a day. What’s more, memory decline was even more significant in people who were slim who ate lots of chilli.

The researchers also found that eating more than 50 grams of chilli daily had almost double the risk of memory decline and poor cognition.

Participants in the study had their cognitive ability assessed through a variety of tests including recalling a 10-word list, counting backwards from 2 and completing basic subtractions.

“Chilli consumption was found to be beneficial for body weight and blood pressure in our previous studies,” lead researcher Zumin Shi said in a statement. “However, in this study, we found adverse effects on cognition among older adults.”

Chilli is one of the most commonly used spices in the world, particularly in Asian countries, but the study found both fresh and dried chilli peppers were of concern. However, sweet capsicum or black pepper were not.

Read more: Why attitudes around dementia need an overhaul

“In certain regions of China, such as Sichuan and Hunan, almost one in three adults consume spicy food every day,” researcher Ming Li said.

While previous studies have linked chilli consumption to speeding up metabolism, increasing fat loss and inhibiting vascular conditions, the latest study is the first to investigate the association between chilli intake and cognitive function. Surprisingly, it was people with a lower body mass index and who were more physically active that were more likely to experience cognitive decline.

Researchers believe people with a normal body weight may be more sensitive to chilli than overweight people, which is why the spicy food impacts their memory and weight more. The study also found that educational levels may have played a role in the results and that further studies need to be conducted to assess the link between spicy food and cognitive decline.

The latest study follows a new set of guidelines released by the World Health Organization (WHO) earlier this year to reduce the risk of dementia. WHO stressed the importance of getting regular exercise, eating a healthy diet and managing weight. It also highlighted the benefit of avoiding “harmful use” of alcohol, not smoking and maintaining healthy blood pressure, cholesterol and blood sugar levels.

There’s currently no prevention or cure for most forms of dementia, but medication can reduce some symptoms. It’s always important to discuss dementia with a health professional and to see whether any medication or treatment is available to ease symptoms.

Do you enjoy spicy foods? Do you think it could increase the risk of dementia?