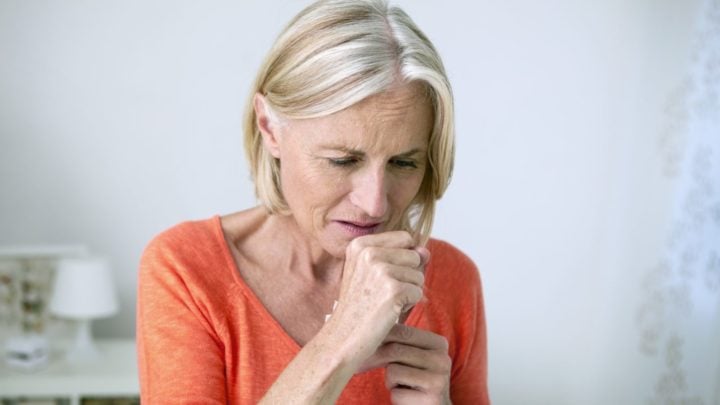 Whooping cough can be just as devastating to over-60s as it is for babies. (Photograph posed by model.) Source: Shutterstock

I do some strange things and strange things always have a way of happening to me, too. I was recently diagnosed with whooping cough (pertusis) something I thought I would never have again because I had it in 1957. I can remember feeling bad then, with a whoop at the end of every time I coughed.

The magic then was that if the whoop persisted best thing to do was take the child/person up in a small plane to fix it. Yeah right! From memory the whoop left me (I think) because I was s**t scared of going in a plane. We went out to Ardmore and took a chartered flight around for about half an a hour. If nothing else my mother was forward thinking and whatever needed to be done to fix something got done — hence my first ever flight over Auckland on the North Island of New Zealand.

This time I feel as sick as a dog. My GP has been wonderful and he picked up that I probably had whooping cough early on. I protested the diagnosis because I wasn’t ‘whooping’, but would have a fit of the coughs and then vomit, which is the whoop part. I think that must be a type of gag reflex. I’ve not been well for weeks, but put it down to all sorts of other things.

With the nature of the illness, I’ve had quite a task advising all I’ve been in contact with that if they develop a spasmodic cough they need to see their GP and advise they have been close to an infected person. That would be me!

What can you do? This life is such fun and games sometimes and pays to go with the flow, even if it is pushing water uphill with a stick sometimes.

I have started feeling better and I’m not so tired. I haven’t been able to sleep properly what with all the coughing. The Chinese call this the ‘100-day cough’. One hundred days! I hope I’m at day 92 — anything less and I’d be totally annoyed.

Given the improvement in my health, I have been out and about, which makes me want to share the brighter, spicier and definitely prettier side of my life.

I went up Ponsonby Road recently just to see what was happening. If you’re not familiar with Auckland, Ponsonby Road is most famous for its food and drink. There are many restaurants and bars in this area of Auckland. I enjoyed being out, strolling along with my new coat (which cost me $30 from Dunedin’s Trader) and looked in all the windows. One of my favourite things is to window shop as it costs nothing and you see all kinds of different and wonderful things that help make you and your day better.

Ten years ago, there used to be a men’s shop called Marvel Menswear. It manufactured its own clothing range, which was amazing. Oh to be involved with a trillionaire metrosexual who would wear their gear. It’s very trendy and yet sophisticated and beautifully made. The shop had incredible stuff and I always enjoyed having a look. They also had odds and ends of different China and bits and pieces for sale, which mad the interior of the shop a festive and fantastic area — I loved looking around. It’s a shame the shop has closed.

Next I mosied along to the second-hand frock shop, which had some nice things, but I didn’t have any money nor the inclination to go in because as sure is there is rain, hail and sunshine I would have seen the handbag, shoes, or whatever of my dreams and would have been unable to get it. Please feel sorry for me…

Finally, I made my way to Texas Radio, a leading clothing and denim destination if you’re looking for international brands or labels. It feels like my home away from home and I enjoyed having a chat to them before heading home. I can feel another coughing fit coming on.

Have you ever had whooping cough? Have you had an illness that seemed to take a long time to recover from?