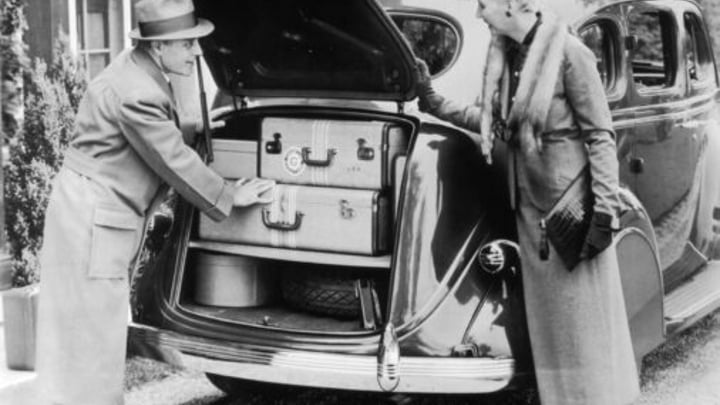 A mature couple pack the trunk of their Chrysler Royal Sedan, 1936. Source: Getty

While the world may not yet quite be your oyster (it’s more of a pippi right now) our Starts at 60 Community is starting to dream about travel again. We’re talking big, juicy, trips. Dusty suitcases brimming with pent-up demand.

An informal poll, snapped on our Starts at 60 Community Facebook page, has revealed our members were hungrily clutching passports in one hand, and hopes and plans in the other, for the long-awaited day when lockdowns became a distant memory and state and federal borders open.

But there is one place, which came in second in our top five destinations, which was somewhat surprising.

We asked: “Where in the world do you want to go when the world opens up and feels safe?”

Almost 100 followers responded, listing the UK/Europe as their number-one destination, with one in five readers dreaming of a trip back to the Old Blighty or a Spanish sojourn.

But proving there was no place like home, staying exactly there – home – came in at second place, with 15 of our community members stating they were content to stay put.

“The next LGA would be good.”

“The next suburb for a start.”

“Just down the bay.”

“Just going out to dinner would be nice.”

By contrast, others were less specific, stating they would go “anywhere”.

According to our poll, and taking “home” out of the equation for now, the top 5 destinations Starts at 60 readers wished to see as soon as they could were:

“Kingscliff, NSW, for our postponed anniversary holiday. Once international travel is working properly we will go to England to see our son and family. Last time we saw our granddaughter she was five months old. She’s now 2.5 years.”

“Definitely Perth to see my children and grandchildren. Haven’t seen them for over two years.”

“Ireland, with my granddaugher!”

“Ayers Rock to celebrate my 60th. On the bucket list.”

“Canadian Rockies, been booked for two years, supposed to be going September 2022.”

The most far-flung destination from Australia was Iceland, while several mentioned the desire to hit the high seas once cruising resumed:

“Booked a cruise to Tassie end of 2022 and planning another for the following year too. Not sure where yet. This will be my fourth attempt.”

Regardless of the destination, the overwhelming reason our readers cited for their wanderlust was the desire to visit family:

“I just want to see my grandchildren and my kids too of course.”

Keen to hit the road? Check out these Travel at 60 holiday deals:

NSW
Travel by rail in 1960s luxury style from Sydney to the Golden West! https://travelat60.com/holidays/travel-in-60-s-style-from-sydney-out-to-the-golden-west

Which destination is on your bucket list for when travel becomes a reality again?