‘The heartbreak of my sister’s early onset dementia diagnosis’ 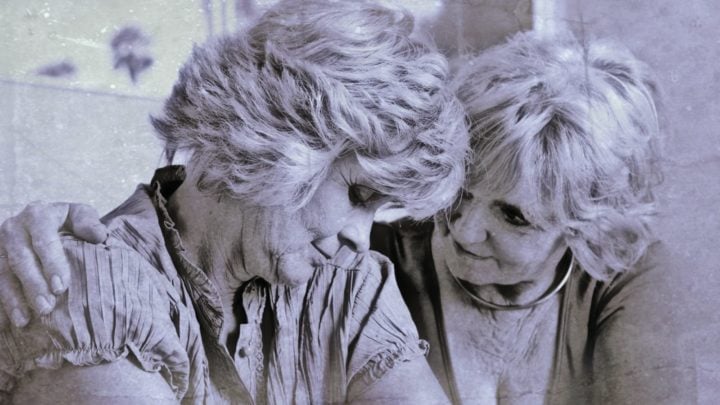 This writer's sister has been diagnosed with early onset dementia and she's heartbroken. (Photo posed by models.) Source: Getty Images

What can you do when your sister is told she has the early signs of dementia? My sister is two years older than I am. We come from a close knit family of seven children. Our parents have passed away, but I’ve been thinking lately that if they were here I’d be looking to my mother for advice.

Deep down, I think my mother would tell me that I need to be there for my sister, to listen to her when she has worries and to avoid passing any judgement because what she needs most is our understanding and love. As much as I know this to be the right thing to do, it can be a struggle. I silently cry for her when she calls me every day to tell me the same story.

My sister has also suffered a heart attack, but was so strong she survived. She lost her husband last year after a short illness. When we caught up with them in March of last year he seemed fine, but by June he was riddled with cancer. I sometimes wonder if these health issues and stresses have added to the challenges she will now face with her dementia … My sister often tells me that she is angry with her husband for leaving her and says she is lonely.

It was her three adult children that suggested there might be something wrong with my sister. They’d said she was moody and was speaking cruelly to them, addid that they’d also noticed she had been forgetting things. They had her assessed.

My sister has begged me to ‘save her’ if they try and put her into a nursing home. She is adament there is nothing wrong with her. She says she will come and live with me. I’ve laughed and said it would be ‘the blind leading the blind’ — her dementia and my two hip replacements would render us both useless. I can’t imagine what my husband would think at the suggestion.

Back to my question though, do I tell her that she has told me her story before? I’ve been known to repeat myself from time to time, but does that mean I have the early signs of dementia too? I know it upsets me when my children alert me to such repetition. I don’t want to upset my sister.

She has been put on medication, but says they aren’t doing anything. Given there doesn’t seem to be a cure for this awful illness, I wonder what the point of her taking tablets is.

All I do know is that I’m slowly losing my sister and I don’t feel like there is anything I can do about it. It’s heartbreaking for our family.

Can you relate to this story? What advice would you have for someone whose loved one has dementia or Alzeihmer’s disease?