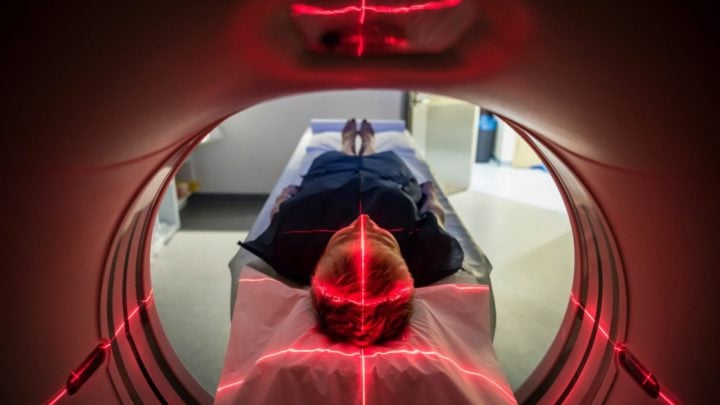 A new study claims reduced blood flow to the brain may be caused by the contraction of cells wrapped around blood vessels. Source: Getty

Alzheimer’s disease is the world’s most common type of dementia and while there’s currently no cure for the memory-robbing condition, researchers believe they’ve identified a new factor linked to cognitive decline in patients.

While the exact cause of the disease isn’t yet known, previous studies have linked ageing, family history, cardiovascular disease and brain injury to Alzheimer’s. Now, researchers from the University College London (UCL) believe reduced blood flow to the brain – which is associated with Early Alzheimer’s – may be caused by the contraction of cells wrapped around blood vessels.

Blood provides glucose and oxygen to the brain as an energy supply and previous studies claim the first change in Alzheimer’s disease is a reduction in cerebral blood flow. The latest research, published in the Science Journal, analysed the role pericytes – cells wrapped around the brain’s capillaries that have the ability to contract and regulate blood flow – play when it comes to the disease.

Researchers examined capillaries in Alzheimer’s-affected human brain tissue and in mice bred to develop Alzheimer’s pathology and discovered that they were squeezed by pericytes. They also noticed that amyloid beta protein – which clumps together and forms a plaque between nerve cells that impair signalling in the brain – also constricted blood vessels when applied to slices of healthy brain tissue.

The constriction of cells was so severe that it caused blood flow to reduce by half, which researchers say is comparable to the decrease in blood flow found in parts of the brain affected by Alzheimer’s disease.

“Our study has, for the first time, identified the underlying mechanism behind the reduction of brain blood flow in Alzheimer’s disease,” lead author Dr Ross Nortley from the UCL Queen Square Institute of Neurology said in a statement. “Since reduced blood flow is the first clinically detectable sign of Alzheimer’s, our research generates new leads for possible treatments in the early phase of the disease.”

Damage to synapses, which are the nerve cell junctions that help deliver electrical and chemical messages to different parts of the brain, is usually is attributed to the build-up of amyloid and tau (a protein contained within nerve cells). Researchers now believe the squeezing of blood vessels needs to be investigated further as a potential cause for the disease.

“Our research raises the question of what fraction of the damage is a consequence of the decrease in energy supply that amyloid produces by constricting the brain’s finer blood vessels,” senior author Professor David Attwell from UCL Neuroscience, Physiology and Pharmacology said in a statement.

In previous clinical trials, there hasn’t been success in slowing mental decline at later stages of Alzheimer’s with medication that clear amyloid beta.

“We now have a new avenue for therapies intervening at an earlier stage,” Attwell said.

There’s currently no medication that slows or reverses brain damaged caused by the disease, but some drugs, diet and lifestyle changes can help patients manage symptoms. It’s always best to talk to a medical professional about treatments for individual circumstances.

Do you know someone who has been impacted by Alzheimer’s disease?