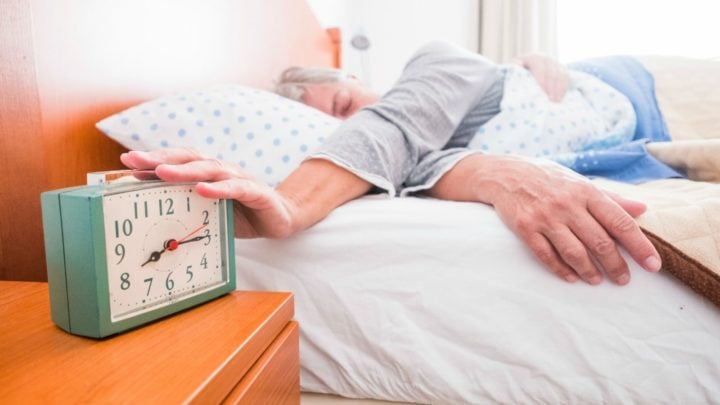 The choice of the alarm that you use may be more important thank you think. Source: Getty.

Your choice of alarm sound may determine whether you wake up in the morning feeling groggy or alert, a new study has found.

The new research conducted by RMIT University in Melbourne and published in the journal PLOS One discovered that melodic alarm tones could improve alertness, while harsh “beep, beep” noises are linked to increased levels of morning grogginess — or sleep inertia, as its technically known.

The study involved 50 participants who logged what type of sound they used to wake up and then rated their grogginess and alertness levels via an online survey. The researchers found that those who woke to more melodic sounds (The Beach Boys ‘Good Vibrations’ or The Cure’s ‘Close to Me’, for example) were associated with increased alertness.

“We think that a harsh ‘beep beep beep’ might work to disrupt or confuse our brain activity when waking, while a more melodic sound like the Beach Boys ‘Good Vibrations’ or The Cure’s ‘Close to Me’ may help us transition to a waking state in a more effective way,” co-author Adrian Dyer said.

Meanwhile, lead author Stuart McFarlane said the surprising finding could have important implications for anyone who needs to perform at their peak soon after waking.

“If you don’t wake properly, your work performance can be degraded for periods up to four hours, and that has been linked to major accidents,” McFarlane said.

“You would assume that a startling ‘beep beep beep’ alarm would improve alertness, but our data revealed that melodic alarms may be the key element. This was unexpected.”

He continued: “Although more research is needed to better understand the precise combination of melody and rhythm that might work best, considering that most people use alarms to wake up, the sound you choose may have important ramifications.

“This is particularly important for people who might work in dangerous situations shortly after waking, like firefighters or pilots, but also for anyone who has to be rapidly alert, such as someone driving to the hospital in an emergency.”

The research comes after a recent study found that sleep deprivation interferes with people’s ability to perform multi-step tasks. While it’s a well-known fact that lack of sleep can affect our ability to focus clearly the next day, the study proved just how dangerous sleep deprivation can be.

“Sleep-deprived individuals need to exercise caution in absolutely everything that they do, and simply can’t trust that they won’t make costly errors,” co-author Kimberly Fenn said. “Oftentimes, like when behind the wheel of a car, these errors can have tragic consequences.”

Do you set a morning alarm? What alarm clock sound do you use?