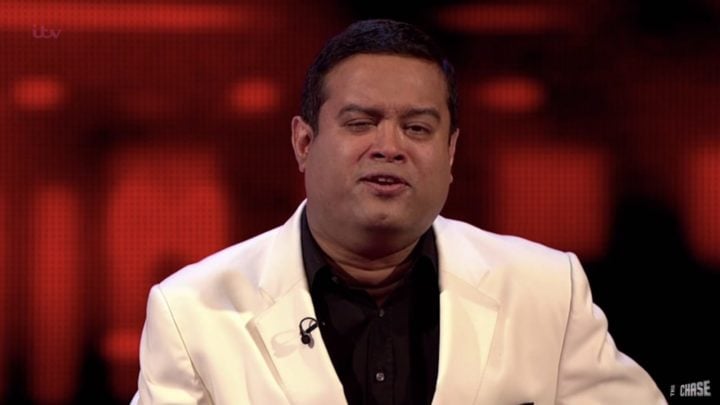 The notoriously tough chaser chose to share the deeply personal news about his diagnosis on social media. Source: YouTube/The Chase.

He is one of the most famous quiz players in the world, regularly impressing viewers with his incredible general knowledge on popular show The Chase, but Paul ‘The Sinnerman’ Sinha made a shocking announcement, revealing he has been diagnosed with Parkinson’s disease at the age of just 49.

The notoriously tough chaser chose to share the deeply personal news about his diagnosis on social media and vowed to fight the debilitating and incurable disease, which affects the central nervous system.

“I have Parkinson’s disease,” he wrote. “I will fight this with every breath I have.”

I have Parkinson's disease. I will fight this with every breath I have. https://t.co/csp72zZmGQ

The 49-year-old TV star and comedian also penned a very emotional blog post about his diagnosis, simply titled ‘Diagnosed’, in which he revealed that he was delivered the life-altering news on May 30th before deciding to go public.

“On the evening of Thursday May 30th, an experienced consultant neurologist calmly informed me that I had Parkinson’s disease,” he wrote on his Sinhaha blog.

Sinha revealed that his path to diagnosis was a long one which started in September 2017 when he suffered a frozen right shoulder, which then led him to be diagnosed with Type 2 diabetes and lose two stone, before undergoing a shoulder operation in January this year.

However things took a turn for the worse last month, during a trip to New Zealand, when Paul said he noticed his right-sided limp was getting worse. Limping is a common symptom of Parkinson’s disease, due to the muscles becoming stiff and inflexible, as well as involuntary shaking (tremors) of parts of the body and slow movement.

“Nonetheless my reaction was not one of shock,” he went on. “I spent May this year in New Zealand simultaneously having the comedy month of my life, and worrying about why a right-sided limp was now getting worse. Behind the facade of the cheerful, late night comedy festival drunk was a man deeply scared about facing the truth when back in the UK.”

While Sinha said the two weeks since he received the news have been “really, really tough”, with the British comedian having to pull out of several engagements including the Edinburgh Fringe Festival and the World Quizzing Championships, he revealed he now has a treatment plan in place.

He also assured fans that he “fully intends to keep Chasing” however he joked that taking part in reality show Dancing on Ice, where celebrities learn how to figure skate, is probably out of the question for him now.

“I have an amazing family, no strangers to serious medical illness, I’m blessed to have a fiance who is there for me, and I have a multitude of friends and colleagues whom I consider to be exceptional human beings,” he added. “I don’t consider myself unlucky, and whatever the next stage of my life holds for me, many others have it far worse.”

He wrapped up the moving post by saying: “A lot of people have asked “What can I do to help ?”  The answer is to treat me exactly the same as before.”
Since sharing the news just 15 hours ago, the star has been inundated with messages of support from his fellow chasers, including Mark ‘The Beast’ Labbett, and fans of his work and the quiz show.
One well-wisher wrote: “That’s very tough news Paul. I’m not sure it knows what it’s taken on though. And there will be a lot of people in your corner.” Another said: “I have a feeling you will fight this with so much strength it will be unreal. Love being sent.”
While a third wrote: “Sorry to hear about your diagnosis Paul. Knowing your resolve you will come out stronger than before. Shout it from the rooftops, raise awareness and you will help others too overcome.”

Paul has appeared on the UK version of the daytime quiz show since 2011, appearing under the names The Smiling Assassin, Sinnerman and Sarcasm In A Suit as the fourth Chaser.

Are you a fan of The Chase? Do you have a message of support for The Sinnerman?