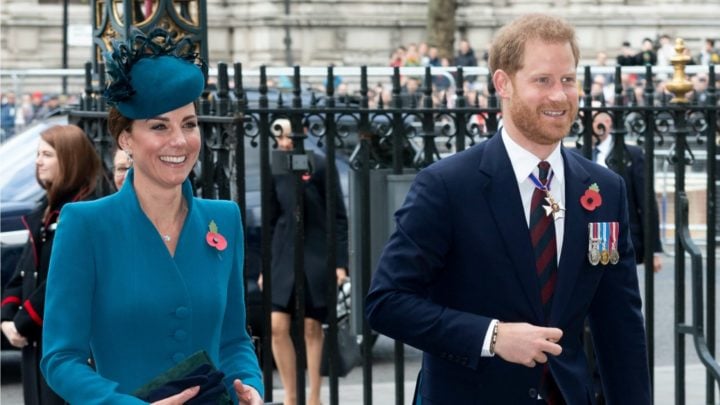 With Prince William in New Zealand and Meghan due to give birth any day now, Prince Harry and Duchess Catherine joined forces for a very special Anzac Day service at Westminster Abbey. Source: Getty

While the world is on royal baby watch with Meghan, Duchess of Sussex due to give birth any day now, her husband Prince Harry and sister-in-law Catherine, Duchess of Cambridge honoured Australia and New Zealand’s fallen soldiers when they attended an Anzac Day service at Westminster Abbey on Thursday.

This year marks the 104th anniversary of the landings on the Gallipoli Peninsula on 25th April 1915 – where thousands of soldiers lost their lives.

Both Harry and Catherine represented the royal family at this year’s service, while royal fans will recall Harry and Meagan visited an Anzac memorial in Sydney during their Australian tour in 2018.

“Having devoted 10 years of service to military duty, including two tours in Afghanistan, The Duke completed his time of service with four weeks with the Australian Defence Force,” a statement issued on the Sussex Royal Instagram page read.

“Their Royal Highnesses remain committed to supporting serving members of the Armed Forces, veterans and the families that support them.”

Today, The Duke of Sussex attends the #ANZACday service at Westminster Abbey with The Duchess of Cambridge and The Duke of Gloucester. The Duke and Duchess of Sussex attended this service last year in addition to the dawn service. They also paid their respects at the #ANZAC memorial in Sydney during their official tour last fall. Having devoted ten years of service to military duty, including two tours in Afghanistan, The Duke completed his time of service with four weeks with the Australian Defence Force. Their Royal Highnesses remain committed to supporting serving members of the Armed Forces, veterans and the families that support them. #ANZACDay commemorates the anniversary of the Anzac landings at Gallipoli in 1915. ANZAC Day is a moment to recognise the Australian and New Zealand Army Corps who lost their lives during the landings, and to honour the sacrifices of men and women in all wars. ANZAC Day has been observed annually in London since King George V attended a service at Westminster Abbey, and more than 2,000 Australian and New Zealand troops marched through the streets. Members of The Royal Family have continued to honour the servicemen and women globally, and today HRH The Duke of Cambridge also paid his respects at @AucklandMuseum. The Duke of Cambridge is visiting The Commonwealth country on behalf of The Queen to pay tribute to those killed in the Christchurch attacks earlier this year.

For the service, Catherine, 37, opted for an elegant teal coat, complete with a matching floral fascinator. The mother-of-three accessorised with a green clutch and matching suede stilettos.

Prince Harry looked smart in a suit and proudly wore a range of war medals to the service.

Meanwhile, Prince William joined crowds in Auckland, New Zealand, to pay his respects. He was joined by New Zealand PM Jacinda Ardern at the Auckland Museum for the Anzac Day Civil Service. He was spotted greeting families and laying a wreath at the touching service.

The Duke of Cambridge is visiting New Zealand on behalf of Queen Elizabeth, at the request of the New Zealand prime minister. Prince William will pay tribute to those affected by the Christchurch mosques terrorist attacks during his visit.

On #AnzacDay we remember the servicemen and women of the Australian and New Zealand Army Corps who have served their nation in times of war. Today The Duke of Cambridge attended the Anzac Day Civil Service at @AucklandMuseum with New Zealand Prime Minister @JacindaArdern. The Duke of Cambridge is visiting New Zealand on behalf of Her Majesty The Queen on Thursday 25th April and Friday 26th April, at the request of the Prime Minister of New Zealand. During the visit, The Duke will pay tribute to those affected by the Christchurch mosques terrorist attack, and will recognise the incredible empathy and unity displayed by the people of New Zealand in the weeks that followed. #NewZealand #Anzac #AnzacDay #LestWeForget

The Queen last led Anzac Day commemorations at the Cenotaph in London in 2015, where she was joined by other members of the royal family to mark the 100th anniversary. The Duke of Gloucester attended the Dawn Service and a service at the Cenotaph this year.

Today is #ANZACDay – a day to honour and commemorate the members of the Australian and New Zealand Army Corps (ANZAC) who served and died in all wars, conflicts, and peacekeeping operations. The day has been marked in London since the first Anniversary of the battle, which took place in 1915. King George attended a service at Westminster Abbey alongside Queen Mary and Members of The Royal Family have honoured the day ever since. The third picture, supplied by Royal Collection Trust, shows ANZAC beach in Gallipoli in 1915. In 2015 The Queen led commemorations at the Cenotaph in London on the 100 Anniversary of the battle and attended a service at Westminster Abbey. Later today members of The Royal Family will attend a service at Westminster Abbey.

In Australia, thousands of people gathered across major cities, towns and rural communities to pay their respects to the fallen soldiers.

Did you attend a service this year? How did you mark Anzac Day?