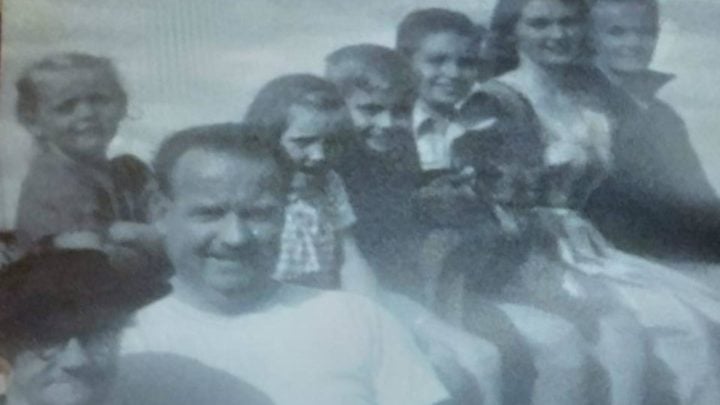 My father (second from left) with my grandmother (left), me (rear left) and my siblings. Source: Robyn McCoy

My father was in the Air Force during World War II, but refused to acknowledge Anzac Day. As a matter of fact, he disliked Anzac Day immensely because he thought it glorified war. He very rarely spoke of his war experiences but, when he did, the sadness in his eyes screamed of horror, regret and bitterness.

He disliked photos of him in his uniform so out of respect for him, I’ll not show any.

My parents would have been married for 81 years this year. They married in 1938, full of hope as fresh-faced young lovers. They had their first baby within 12 months followed by two more. Then their whole world was torn apart in the form of World War II.

These were the people of the ‘Greatest Generation’, the veterans who fought in World War II, born between World War I and the mid-1920s, coming of age during the Great Depression. A tough, stoic people.

Dad didn’t wait for the ‘call up’, he volunteered such was his commitment to ‘saving’ his family. He believed this to be true and ‘the right thing to do’ as did many of his era.

I would never presume to know what the next seven years held for my dad. Seven years! He very rarely spoke of it. The facts are he was in Darwin when the bombs fell, he tramped the Kokoda mud, he respected the ‘fuzzie wuzzies’, he was wounded by bullets and shrapnel, he questioned his faith and the very reason to fight this fight at all. That much we do know.

Why was he away for seven years? Nobody seems to know apart from the fact that he fought, was demobbed and sent to the Snowy Mountain’s Project. Then he came home; fathered three more kids.

My immediate family consists of three older pre-war kids known as the ‘Silent Generation’, a gap of seven years, then three younger ‘Baby Boomer’ post-war kids. I am the youngest of the six. Same parents, lots of questions but no answers; and we all knew better than to ask.

Dad spoke to me twice about the war. He told me how shocking it was to kill another human being and he spoke of the gentleness of the ‘fuzzy wuzzies’ in Papua New Guinea. Each narrative lasted no longer than a minute or two with no questions allowed. I knew better than to press the subject.

The Australian Federation of Totally and Permanently Incapacitated Ex Servicemen and Women (Queensland Branch) Inc. (QLDTPI) pension was extremely difficult to get. Many loops and hurdles, twists and turns were applied, but once the ‘TPI’ was awarded, folk knew it was damned well deserved.

My father was granted the TPI but, sadly, he died at the young age of 56 due directly to his war injuries. My mum then received the War Widows Pension. Our family remains grateful for both.

These days Anzac Day has a whole new meaning. It does not aim to celebrate or glorify war but to commemorate and honour the fallen, not just in World War I, but all wars. I’ve attended Dawn Services for the past few years despite my father’s aversion to the day; and this year will be no different. Gosh, I hope he understands and forgives me.

Did you or a loved one serve in a war? What were their thoughts of Anzac Day and other commemorative ceremonies? Do you attend the commemorative services on Anzac Day?