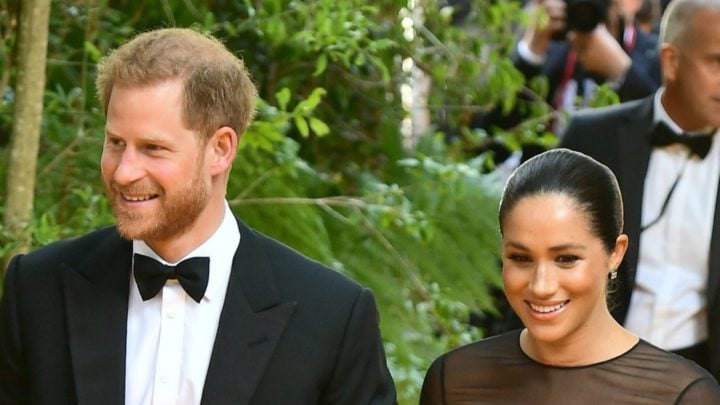 Prince Harry and Meghan stepped out in style for the premiere of The Lion King. Source: Getty

She’s technically still on maternity leave after giving birth to baby Archie two months ago but that hasn’t stopped Meghan, Duchess of Sussex, from enjoying a special date night with Prince Harry.

The young royal couple were two very special guests at the UK premiere of The Lion King on Sunday evening. The film was originally released as an animated movie in 1994 and tells the story of a young lion named Simba who is destined to become king. Meghan and Harry were among the first people in the UK and the world to watch the reboot of the film, which stars Donald Glover, Seth Rogen, John Oliver and Beyoncé Knowles-Carter.

Meghan, 37, and 34-year-old Prince Harry looked every inch the royal couple as they walked the special yellow carpet at the premiere in London’s iconic Leicester Square. For the event, the former Suits actress opted for a stunning black gown by designer Jason Wu.

The dress included a sheer panel across the top of the bodice.

The mother-of-one accessorised with a matching pair of black heels, a black clutch purse and a sparkly pair of earrings. She wore her luscious brunette locks in a tight bun for the star-studded event and opted for minimal make-up.

Meanwhile, Prince Harry looked as handsome as ever in a black two-piece suit and tie, matching perfectly with his wife. According to a statement from Buckingham Palace, the premiere was held “in “support of the conservation and communities work of His Royal Highness through The Royal Foundation”.

On the red carpet, Meghan and Harry were captured mingling with stars of the film and other familiar faces. Elton John – who wrote many of the original songs in The Lion King – was in attendance. He and his husband David Furnish were photographed giving the young royal couple a big cuddle and kiss on the red carpet.

It’s not the first time Meghan has been spotted out and about since giving birth to Archie. On Saturday, she joined the Duchess of Cambridge and Pippa Middleton for the women’s singles final of Wimbledon.

Watching the match between Serena Williams and Simona Halep from the royal box, the three women dressed to impress for the match. Meghan wore a crisp white shirt teamed with a pleated Hugo Boss midi skirt, which featured a striking blue and black pattern.

Wearing her dark locks in a pulled back pony, the mother-of-one, who recently celebrated baby Archie’s christening, looked effortlessly glamorous for the occasion.Meanwhile, Catherine recycled a gorgeous green Dolce & Gabbana midi dress, which she previously wore in 2016 on a visit to Canada, coupling the £2,150 (AU$3,850) frock with a cream handbag from the same brand and towering nude stilettos. Catherine’s younger sister Pippa wowed onlookers in a blue and white floral dress, proving she’s every inch the fashionista.

Read more: Catherine, Meghan and Pippa are all smiles together at Wimbledon

Are you a fan of Meghan’s style? What do you like to wear for a night out?