Girls’ day out: Catherine, Meghan and Pippa are all smiles together at Wimbledon 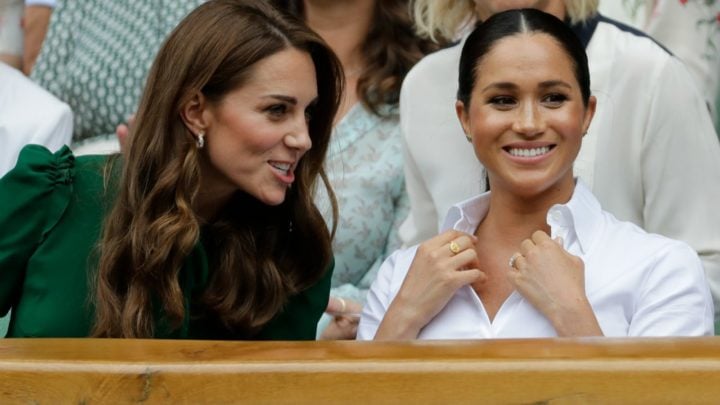 The royal pair put on a show of unity on Saturday as they attended Wimbledon. Source: Getty

There have been rumours of a rift between the Duchess of Cambridge and the Duchess of Sussex recently, but the royal pair put on a show of unity on Saturday as they attended Wimbledon to watch Meghan’s good friend Serena Williams, who was defeated by Romania’s Simona Halep, compete in the women’s singles final.

The duchesses watched the match from the royal box, alongside Catherine’s sister, Pippa Middleton. It’s the second time in a week the royal duo have made a joint appearance, after attending a charity polo match on Wednesday.

Showing her thrifty side, Catherine recycled a gorgeous green Dolce & Gabbana midi dress, which she previously wore in 2016 on a visit to Canada, coupling the £2,150 (AU$3,850) frock with a cream handbag from the same brand and towering nude stilettos.

The royal opted to keep her beautiful brunette locks in their usual slightly curled style.

Meanwhile, Meghan wore a crisp white shirt teamed with a pleated £350 Hugo Boss midi skirt, which featured a striking blue and black pattern. Wearing her dark locks in a pulled back pony, the mother-of-one, who recently celebrated baby Archie’s christening, looked effortlessly glamorous for the occasion.

It’s the first time the royal women have stepped out together this week — on Wednesday the pair joined forces to cheer on their husbands — Prince William and Prince Harry — as they took part in the King Power Royal Charity Polo Day at Billingbear Polo Club in Wokingham, UK.

Meanwhile, Catherine looked stunning in a floaty pink maxi dress for the occasion as she took charge of all three of her young children, who were seen playing with each other at the event.

Are you a fan of the duchesses? Do you like their style?