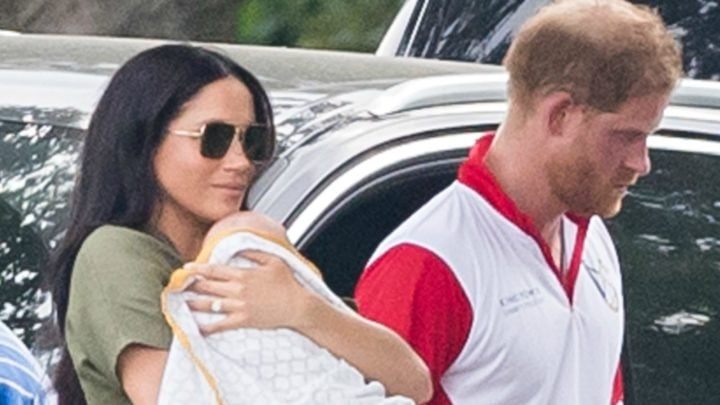 Doting mum Meghan was seen cradling her new babe and planting tender kisses on his head as she cheered on husband Prince Harry. Source: Getty.

The public have been treated to just a few glimpses of baby Archie Harrison Mountbatten-Windsor since he made his way into the world more than two months ago, but now the newest member of the British royal family has been spotted on his first family day out.

Doting mum Meghan was seen cradling her new babe and planting tender kisses on his head as she cheered on husband Prince Harry as he took part in the King Power Royal Charity Polo Day at Billingbear Polo Club in Wokingham, UK, on Wednesday.

The Duchess of Sussex joined her sister-in-law the Duchess of Cambridge, whose husband Prince William also took part in the annual charity match, playing on the opposite team to his younger brother, as well as her niece and nephews Prince George, Princess Charlotte and Prince Louis for the summer outing.

The polo game was held in honour of Leicester City chairman Vichai Srivaddhanaprabha, who was killed in a helicopter crash at the King Power football stadium in Leicester in October last year.

Meanwhile, Catherine looked stunning in a floaty pink maxi dress for the occasion as she took charge of all three of her young children, who were seen playing with each other at the event. And one sweet photo showed one-year-old Prince Louis reaching his hand out to touch his mother’s face as she crouched alongside him.

Catherine was also photographed sitting alongside her entire brood, with little Prince Louis seen enjoying a snack as five-year-old Prince George stood in the boot of the family’s car, while four-year-old Princess Charlotte couldn’t seem to sit still.

It is the first time that the three young royals – who bear the title of prince and princess unlike Archie – have been seen in public with their newest cousin, as the four youngsters enjoyed their first playdate.

While their parents, the Duke and Duchess of Cambridge featured prominently in Archie’s official christening photos, which were released by the palace over the weekend following the very private event, it has not been confirmed whether George, Charlotte and Louis were in attendance.

The Prince of Wales and Duchess of Cornwall, who are grandparents to Archie, were also seen smiling proudly in the shots, alongside the two sisters of Princess Diana. While Her Majesty the Queen was notably missing from the event, as it was previously confirmed that the monarch would have to miss the special occasion due to a prior official engagement.

Today The Duke of Cambridge and The Duke of Sussex are taking part in the King Power Royal Charity Polo Day for the Khun Vichai Srivaddhanaprabha Memorial Polo Trophy.

The charity match is helping raise funds and awareness for charities supported by Their Royal Highnesses. pic.twitter.com/9ziCa0pN9G

Meghan’s outing comes just days after she was slammed for her alleged “high-maintenance” behaviour at Wimbledon, as a British columnist published an article in The Daily Telegraph in which she claimed that Meghan’s staff asked people, specifically, a woman named Sally Jones, not to take photos of her at Wimbledon because she was there in “a private capacity”.

Are you glad to see Meghan spending time with her in-laws? Do you think baby Archie looks more like his mum or dad?