‘The wonderful memories of camping in Australia at Christmas’ 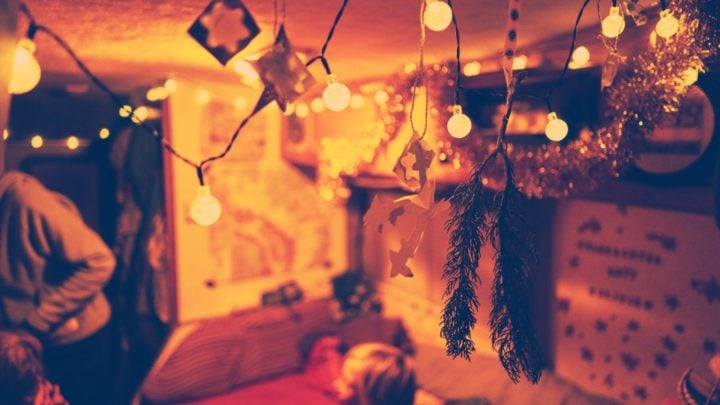 Julie shares her memories of what it was like camping at Christmas time during one of the hottest days of the year. Source: Getty Images

Christmas draws near, with happy memories of camping during this festive time of the year. Heading down the highway, Yuletide took us to an on-site caravan with a canvas annexe, in a pet friendly, little bush town of Australia. We were surrounded by other campers; it was a busy time of the year. There were big rigs, four-wheel drives, air-conditioned campervans, even a family touring in a bus.

The happy campers all paused in our sedate camp on Christmas Day. That particular year, the day dawned ‘stinking hot’ as my old grandfather liked to say, in his rustic way. Yes, stinking hot, at least 40C by 9am.

For some of the co-campers who were visiting from far flung farming regions, this was a stopover for seaside holidays for their families. At Christmas and New Year, all the camping grounds were overflowing with holidaymakers.

By 11am, I was walking my cute fluffy fur friend on her ablutions, saying g’day to some little farm boys who were riding around on their new bicycles, gifts from Santa. Riding round and around, faces aglow. Gee, it was hot.

The Park Manager also strolled by, with a smile, a slab of beer, and a six-pack of bourbon cans. The little lads surrounded him on their pushbikes, with eager faces.

“George, where is the beach?” I stopped too. That was a very good question. Amazed, George set down his stash of bevvies, pushing his hat back. Taking this seriously, he put his hands on his hips.

“Look around here, kids. Can you see the caravan and tents?”

“No, George.” They all shook their heads.

“Look over there, kids. Can you see those cows in the paddock?”

“No, George.” As I wrote, these kids had not been around much.

“Look over there, kids. See those sheep?”

“Look over there, kids. See those Kelpies? Do they look like the beach?”

“No, George, we don’t look at the Kelpies. They’re scary. We don’t want to look at the kelpies.”

This was quite right. My little dog I was holding tucked her head under my arm. No one wanted to look at the Kelpies. Scary. The Kelpies had come in a ute from the real bush, back of beyond, to celebrate Christmas. They were three litter mates, champion sheepdogs, and they knew it. Identical, jet-black, with tawny eyes, glaring. The Kelpies did not say much, they stared at folk passing by their ute, turning their heads in unison, making sure no one touched their owner, their ute or them.

Very glary and scary, the Kelpies. Anyway, no one looked at them. Back to the kids’ quest for the beach. George pointed to the one and only tap, behind the communal laundry. “There’s a tap. If you’re hot, stick your heads under it. But go easy on the water, there’s a drought on. Don’t take too long, it’s time for the Christmas party.”

George picked up his slab and bourbons, then laughed. “Kids say the funniest things.”

Good idea, I thought, so I washed my hot, fluffy, fur friend under the tap, and had a cool shower. We were all ready for the Christmas party in the fairy lit annexe, as the hot afternoon melted into dusk. There was an electric barbecue, with sausages sizzling, salads, chips and nibblies, lollies, booze and soft drinks. Camp chairs, good music, plus the soundtrack of a karaoke. Simple bush make-your-own fun.

The first highlight was the Kelpies’ owner and his mates, Lee Kernaghan impersonators, with cardboard guitars they had made. Prancing in their best bush boy gear and hats. Boy, they could sing. Line dancing commenced. These young blokes had come in from the bush, been shearing, spraying crops, culling kangaroos.

Others tried their voices at singing along. As the glittering stars blazed in the midnight-blue great southern skies, a cool breeze sprang up. We all sang ‘Silent Night’, with sheep and cows lowing in the background, as in the first Nativity. The young ones had dropped off to sleep.

Ah, happy memories, when a caravan was a temporary home, for camping at Christmas.

Have you been camping at Christmas time? What does your Christmas travel look like?