‘One for the bucket list: A cruise through the Mediterranean in summer’ 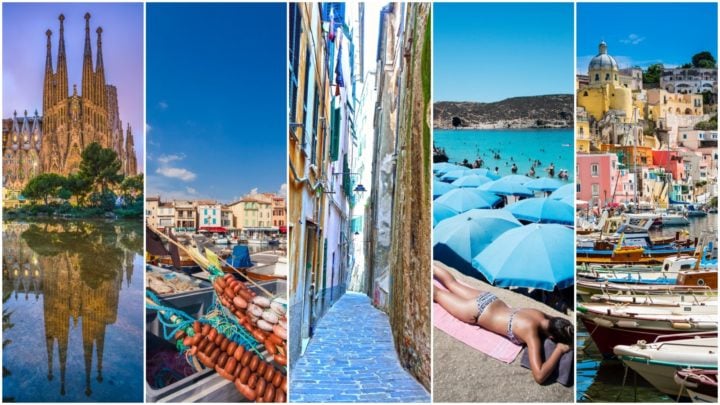 Woohoo! We were on our way. We’d had a seamless check-in with our airline and although the connection between flights from Singapore to Italy on our way to Spain was a long one, once we were in the air everything was A1!

Our final destination was Barcelona, the second most populous city in Spain. Located on the coast between the Llboregat and Besos rivers, Barcelona is as much regarded for its history as it is for its progressiveness as a ‘smart city’.

It was here I saw the biggest cemetery I’d ever seen, Montjuic. The cemeteries in Barcelona — and there are many — aren’t just places for mourning the dead. People come here as a means of learning about the city’s past and to pay tribute to those who contributed to the development of Barcelona. They tell the stories of the city’s lively history and include tributes to ancient Jewish settlements and acknowledge troubles of the civil war.

Another place well worth visiting was the Basilica de la Sagrada Familia. A unique temple, famous architect Antoni Gaudi was the main man behind the design of this place of worship. He was commissioned as a relatively new architect in the 1880s after technical differences and the cost of materials saw original architect Francisco de Paula del Villar replaced.

A post shared by Basílica de la Sagrada Família (@basilicasagradafamilia) on May 7, 2020 at 10:06pm PDT

Gaudi worked exclusively on the Temple of the project from 1914 until his death in 1926. Five generations on and the Temple continues its progression and after more than 135 years it is expected that the neo-Gothic Basilica will be completed (once and for all) by 2026.

We waited two days for tickets to experience the Sagrada Familia, and would recommend booking early if this is something on your ‘must see’ list. While we waited, we drowned our sorrows in sangria and tacos in Las Ramblas.

One of the first landmarks tourists will identify with in Barcelona, Las Ramblas is the large boulevard that runs through the heart of the city centre. the Port Vell cruise terminal is at the southern-most end while Placa de Catalunya is at the north. At 1.2 kilometres, we easily walked our way along the boulevard (and traffic is restricted in this area anyway).

There are dozens of restaurants and shops along the full length of Las Ramblas, but brace yourself for elevated prices. This is due to the popularity of the area.

As part of our summer in Europe, we departed Barcelona onboard the MSC Seaview. Having done a number of cruises, I found this ship to be amazing!

There was a four-deck glass-walled atrium and two glass-floored catwalks giving us sensational ocean views. Perfect for our Mediterranean jaunt that stopped in the ports of Genoa, Naples and Messina in Italy, Valetta in Malta, Barcelona and Marseilles in France.

Marseilles is the oldest city in France and one of the country’s most important ports. Unlike other tourist hubs in the Mediterranean has only really opened up to tourism since the 20th century.

Our first tour was to Cassis, a quaint fishing village to the east of Marseilles. It had such charm, with its pastel-coloured houses lining the harbour and shops and cafes taking in the scenic views of the French Riviera.

It stands 76 metres (249 feet) and was constructed in the 1100s. If lighthouses and nautical history are your thing, there is a museum dedicated to the lighthouse that can be reached by walking from the old city walls to the foot of the beacon at the via Milano. However, I opted for a trip to Portofino on the Italian Riviera coastline.

The day was hot and sticky, but I still had a pleasant time. Much like Cassis, Portofino is a renowned fishing village but it’s also a holiday resort town and there are plenty of high-end boutiques to be found among the pastel-coloured houses and seafood restaurants.

Ever been to Portofino, Italy?🌸 Photo by @enk420 #Travel #Portofino #Italy

In Naples, we couldn’t let an opportunity to visit the Isle of Capri pass us by. Situated in the Bay of Naples, Capri is famous for its landscape and shopping.

I took the Monte Solaro chair lift in Anacapri where I enjoyed spectacular views of the Gulf of Naples and Vesuvius. You’ll also see the Gulf of Salerno, Anacapri, the Isle of Ischia and that beautiful blue sea. Monte Solaro is the highest point on Capri and you’ll need to be made of strong stuff to take on the heights that the chair lift affords.

Befriended by a group from Vancouver, Canada, after our journey we found a local bar and had drinks until the ferry departed back to the cruise ship.

On our jaunt to Messina, which is located on the north-eastern side of Sicily, we travelled via the Ionian Sea and then the Tyhrrenian Sea to get as close as we could to Calabria (without swimming).

My husband, John, had worked with a guy from Malta who told (and retold) stories of his homeland. For that reason it was on our ‘must see’ destinations. It’s a small independent nation in the centre of the Mediterranean roughly 93km (58 miles) south of Sicily. There are three islands — Malta (the main island, which is also the largest and most developed), Gozo and Comino.

One of the most beautiful places we visited in Malta was the Blue Lagoon. It’s a shallow bay between two islands and had the most clear blue water I’d ever seen. It was a major tourist attraction and, given our summertime visit, was popular during our visit. I’d recommend taking a boat trip to get there.

Our time in Malta also involved a trip to Malta’s fishing village, Marsaxlokk. This place was popular for the daily open-air market, which sold a selection of fresh fish in the restaurants on the island. Marsaxlokk is quite secluded and the walk along the promenade taking in the beautiful coast was quite peaceful.

Before we knew it, it was time to head home to Australia. What a way to spend the European summer!

Have you travelled the Mediterranean? Is a cruise on your bucket list?