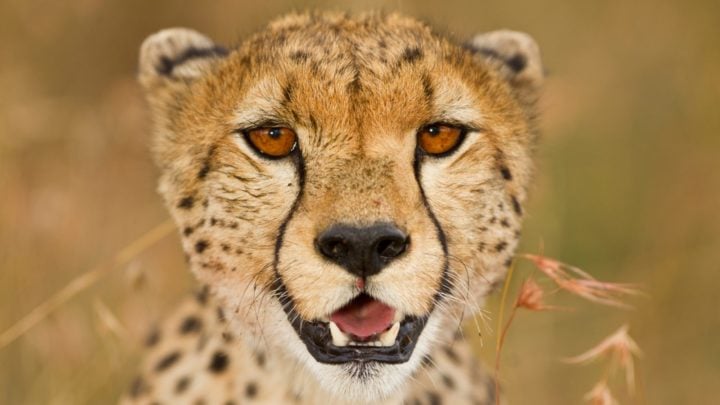 May got up close to an African cheetah during her stay at the Jamala Wildlife Lodge in Canberra. Source: Getty Images

I grew up on a diet of Tarzan movies. Saturday afternoons were spent in front of the television with Johnny Weissmuller and Cheetah the Chimp. Sometimes a good wrangle with a massive boa constrictor was included.

I thoroughly enjoyed the book series by Edgar Rice Burroughs too. Sometimes I would imagine myself as a native princess being sacrificed into an erupting volcano to appease the gods. I saw myself as a stoic Susan Hayward lookalike being rescued by the hero in a loin cloth, moments before the possibility of meeting a fiery end.

Africa has always been on the ‘Must Do’ list thanks to Tarzan and a cast of elephants, giraffes and rhinos. Unfortunately, that list is also extremely long.

My daughters surprised me on the occasion of my 60th birthday with the local equivalent of an African adventure with an overnight stay at the Jamala Wildlife Lodge, a part of the Australian National Zoo in Canberra’s Molonglo Valley.

The zoo was established by a local family in the late-1990s. They were committed to the welfare of the animals at the zoo. The addition of Jamala Wildlife Lodge allows the zoo to continue its growth and also supports breeding programs. As a guest, I was treated to thrilling, close encounters with some of the world’s most dangerous and endangered animals.

Arriving at the African-themed accommodation, I was just in time to enjoy an extravagant afternoon tea while looking out through huge glass windows at black and white Colobus monkeys playing with bananas and toys in their enclosures. Windows on our other side allowed us to view an array of fish swimming by in the National Aquarium in the same facility. Talk about having hundreds of eyes on you while eating a scone!

The group then gathered for a chat by an animal keeper who introduced us to a couple of cats. Big cats. Cheetahs, who were just adorable. This was followed by an introductory walk around the zoo grounds by a keeper who highlighted some of the animals with fascinating facts.

My daughters had booked a Giraffe House for our stay and we were all mesmerised to see Hummer, a giraffe, at our back balcony awaiting our arrival and to be hand fed carrots. What an experience to be at eye level with a giraffe. You know, I was so close I could count his eyelashes!

The Giraffe Treehouses are set among the lodge’s lush surroundings. The luxury indoors included a king-size bed, bath tub, bath robes, climate controlled air-conditioning, complimentary Wi-Fi and premium amenities. There were about eight stairs to climb to get to our lodging.

Pre-dinner drinks were served at sunset on the balcony where the group was able to view the hyenas being fed, followed by a delicious three course dinner that was gatecrashed by a pair of lions.

Despite our African-inspired lodgings being quite lavish, sleep did not come easy with the sounds of various animals calling in their enclosures throughout the night. I could hear the wolves, bears and lions having a grand time singing under the stars.

Have you ever been woken by a giraffe staring at you? I was and it was just wonderful! A little bit of a fright, but wonderful.

After an early breakfast we went with a keeper as he fed the animals their breakfast. This is when the creatures are at their cheekiest and there was lots of laughter at the antics of the monkeys and otters.

Canberra may well be a very long way from Africa, though it certainly provided a taste of what a holiday to that part of the world could be like. I even pet the ‘Labrador of Africa’ — the rhinoceros.

My overnight stay was an experience to remember. Now I just have to keep looking for that fella in the loin cloth.

Have you been to Jamala Wildlife Lodge in Canberra, Australia? Is an African safari on your travel bucket list?