‘Bowral’s Bradman Museum is not just for cricket tragics’ 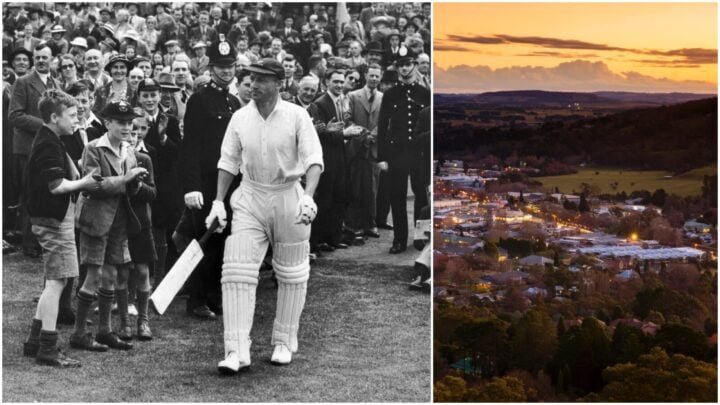 I’ve loved the game of cricket from a very early age. It’s a sport that has so many different facets to it that I find most fascinating. There are of course the three aspects of bowling, batting and fielding, but more broadly I appreciate that any one, of any age or skill level, can get involved.

At the International Cricket Hall of Fame, more affectionately known as the Bradman Museum, at Bowral in New South Wales I’ve witnessed a number of seniors cricket matches, where those playing are aged well into their 60s, 70s and 80s.

Another thing I love about cricket is the tradition and heritage of the game. When I first started watching cricket I was eight years old, but even then I knew that the sport had a history that went back hundreds of years. I’ve enjoyed seeing how things have developed and evolved over time, not just for the sport but the human condition too; the ways cricket has reflected society, such as how it was played (and the impact it had on communities) during the Depression era and when World Series Cricket was introduced in the ’70s. It was even able to break down the class war in 19th century England because it offered a level playing field.

Of all sports, I feel it reflects society more than most, especially in Australia.

This ‘level playing field’ was particularly prominent when the Australians first started playing international cricket. In those early games against England there was an air of possibility that we could beat them. Back then we were a colony, and I know we look upon colonisation quite differently today, but in those days there was something to be said about being able to play against England and be considered equal with the Brits.

As the sport has advanced, we’ve seen issues of players taking control over their own rights, which occurred just before World War I. We also saw a number of famous players go off to war and not come home.

It was during the Depression we had someone like Don Bradman to look to for inspiration. He was such a great player! During a period where we were looking for icons and those things that could bring joy to our lives, Bradman and the Australian cricket team very much did that and the memories carry on today.

I played a lot of cricket when I was young. I was a junior cricketer and played various levels from club to rep to state, but got to a point in my late teens when I moved on to other areas to do with my career. I wasn’t good enough to go on to play state cricket or anything of that nature and that was fine. It didn’t stop me becoming a keen spectator.

Watching cricket over the years has become important to me. I love going to games and feeling the excitement of being in a large crowd and seeing history happen.

I remember watching Australia play the West Indies at the Sydney Cricket Ground in January 1996. It’s one of the most memorable moments in cricket history; we needed four runs to win on the last ball and Michael Bevan, as he often did in one day cricket, hit a boundary that took Australia to a victory that looked impossible.

There were 45,000 people at the ground that day and everyone went up in one voice. The crowd was electric. Sometimes, when you are in those large crowds you can get lost, but when you’re all there for the one reason, it’s a real community atmosphere at a heightened level and you go home buzzing.

I’ve a lot of favourite cricket players and, thanks to my involvement with the Bradman Museum and my role as a historian, those players are quite diverse in their skills. One such player I’ve admired in more recent years has been current Australian cricket coach Justin Langer. He was a tremendous player in my opinion. I also felt he worked as hard mentally as he did physically for the betterment of his game. I admire that sort of dedication.

From a historical standpoint, some of my most admired cricketers aren’t even Australian. I am fascinated by two openers from the ’20s that are English — Jack Hobbs and Herbert Sutcliffe.

I commend players like Sir Donald Bradman. People think he was just so talented, but knowing his life through his teenage years, he often didn’t score a lot of runs. He had to really step up, like we all do, to be the best he could be.

There is a cricket bat on display in the museum that was used when he scored his first test century in England. He spoke about it eight years after the achievement with disappointment, believing he could have done better. He realised how good he could be at test level and went on to become the player we remember today.

It’s those things fascinate me. That someone as great as Bradman still felt he needed to work hard physically and mentally and make that step up.

The Bradman Museum provides an excited and educational day out for everyone, and it’s a mere 1.5 hours’ drive from Sydney. If you’re interested in visiting the museum (and taking in the sights of the stunning Southern Highlands of New South Wales), all details can be found online at its website.

Do you have a sporting interest that has taken you to far-off places? Have you immersed yourself in the NSW Southern Highlands?