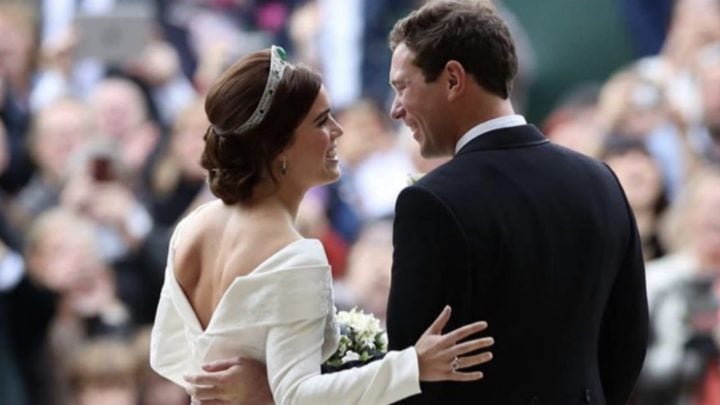 The young royal penned a moving post to others affected by scoliosis. Source: Instagram/Princess Eugenie.

Despite being one of the most high-profile members of British royalty, Princess Eugenie hasn’t held back when it comes to revealing personal details about her health, having openly discussed her scoliosis diagnosis on several occasions.

The Queen’s granddaughter also earned a legion of praise from around the world last year when she opted to wear a wedding gown with a low-cut back as she tied the knot with long-term partner Jack Brooksbank in October.

Now, the 29-year-old princess has opened up about her battle with the condition yet again, as she marked International Scoliosis Awareness Day with a moving Instagram post, sending her thoughts to those also affected by the curvature of the spine.

The photographs showed Jack and Eugenie at the altar as they said their vows, with one image zooming in on Eugenie’s scar. While another showed the couple emerging from the chapel, with crowds of well-wishers gathered outside.

She continued: “I have been overwhelmed by the messages of support that I have received since showing my scar on my wedding day.

“To all of you who have just received the diagnosis, to those wearing braces, to those recovering from an operation and for those who have lived with a scar for years – My thoughts are with you on Scoliosis Awareness Day.”

She finished by saying: “And to the doctors, nurses, physiotherapists and researchers – Thank you.”

The post, which was shared in the early hours of Sunday morning (AEST), was flooded with comments from Eugenie’s followers who thanked the young royal

“Thank you for sharing your story and not pretending to be perfect. That is a true princess,” one person wrote.

Another said: “On behalf of Curvy Girls all around the world, thank you so much for sharing your story and spreading Scoliosis Awareness!”

While a third commented: “Thank you for your support! You can’t even realise how much you are helping change the perception of scoliosis worldwide, and legitimising efforts even within the medical community. We are all grateful for your advocacy!”

Eugenie, who is the youngest daughter of the Duke and Duchess of York, first spoke about her scoliosis diagnosis in the months leading up to her wedding, which took place at St George’s Chapel, in the grounds of Windsor Castle.

Last year, she marked Scoliosis Awareness Day by revealing images of her X-rays, showing for the very first time the pins and rods she had put around her spine when she was just 12-years old.

Speaking ahead of her wedding on UK television, she hinted at the fact she would show off her scar on her special day, with it later being revealed that she had specifically requested a gown with a low back.

“I think you can change the way beauty is, and you can show people your scars and I think it’s really special to stand up for that,” she said.

“The Royal National Orthopaedic Hospital, the RNOH, is a huge charity — I’m patron of their appeal and I had an operation when I was 12 on my back, and you’ll see.

Have you, or anyone you know, been affected by scoliosis? Do you admire Princess Eugenie for speaking so openly about her diagnosis and treatment?